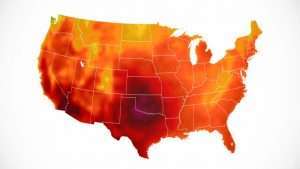 (CNN) — Heat alerts cover more than 20 states today and tomorrow across the Southern Plains and parts of the Northeast, and temperatures will soar above the century mark for 60 million people over the next week. All while a similar heat wave is bringing all-time record temperatures to Western Europe.

“Dangerous heat will continue to impact a large portion of the US this week, with now more than 100 million people under excessive heat warnings or heat advisories,” the Weather Prediction Center said.

The highest temperatures, pushing well into the triple digits, will be once again centered over the southern Plains.

More than two dozen record highs are possible today and tomorrow for the Southern US, including Texas, Oklahoma, and New Mexico, and the East Coast is about to get into the mix as well.

Parts of the Northeast will also have temperatures nearing daily records Wednesday and Thursday.

“Heat advisories are also now in effect for Wednesday for portions of the Northeast, including the I-95 corridor from Philadelphia to Boston, where heat index values are forecast to reach near 100 degrees,” the Weather Prediction Center said.

After a record-breaking heat day yesterday, the southern Plains are being met with dangerous heat once again.

Dallas inched toward its daily record of 110 degrees yesterday but topped out at 109, making it the hottest day of the year so far.

But today will be worse.

Temperatures are forecast to reach 111 degrees in the area, crushing the daily record of 108.

The oppressive heat has strained the Texas power grid, as the state expects another day of record energy demand.

Excessive heat warnings and heat advisories are in effect through Wednesday for North and Central Texas.

“The air temperatures will climb to 105 to 110 degrees in the warning area, with heat index values over 105 degrees in the advisory area,” the National Weather Service in Fort Worth said.

The TEXAS Outdoor Musical announced they were delaying their Tuesday evening show as a result of the expected high temperatures.

“We have decided to delay tonight’s show due to expected record high temperatures, in order to keep our cast, crew and patrons safe,” a statement on the event’s Facebook page read.

The event is located at the Palo Duro Canyon in the Texas Panhandle near the cities of Amarillo and Canyon.

“Very hot temperatures are expected today with widespread highs near or above 105 degrees. Some places across the eastern Panhandles may warm up to 110 to 115 degrees, which includes Palo Duro Canyon. Be sure to take extra precautions to stay safe in the heat,” the National Weather Service Amarillo said, adding record-breaking heat was expected Tuesday.

As hot temperatures, low humidity, and wind speeds pick up, a critical fire danger threat is also in effect for northern Texas and central Oklahoma.

Oklahoma City could see highs nearing 110 degrees today, which would break their daily record of 109 set back in 1936.

“The last time we had a substantial stretch of heat was in 2011, when we had 63 days greater than or equal to 100 degrees,” Vivek Mahale, a Norman National Weather Service meteorologist, said.

Mahale expects the above-average heat to continue into at least Sunday, with every day reaching the triple-digit mark. The Oklahoma City Will Rogers World Airport has seen nine days above 100 degrees this month.

He advised the best thing you can do to prepare is to check on vulnerable populations as temperatures will be five to seven degrees above normal.

“We really want to emphasize you want to check on your friends, family, and neighbors during the heatwave, especially susceptible populations such as the elderly,” Mahale said.

About 8,800 customers in western Arkansas — where temperatures were forecast to reach 106 degrees Fahrenheit — were without power around noon Tuesday after a windstorm damaged the local electric system.

While the windstorm broke more than 40 electric poles, Paris Mayor Daniel Rogers told CNN, “the problem here is the heat.”

Paris High School opened for people “who need a cool place to be after last night’s storms,” according to a Facebook post, a resource the mayor urged residents to take advantage of.

“Don’t try to brave out the heat,” the mayor said. “Heat-related illness is a serious matter.”

In Louisiana, a funeral will be held Thursday for a Natchitoches Police Department officer who died Saturday evening from “an unexpected heat related medical event while working in the downtown district,” the police department announced on Facebook Tuesday. Natchitoches is about 76 miles southeast of Shreveport.

“Please continue to keep his family and all that had the privilege of knowing Officer Brian Olliff in your thoughts and prayers,” the post read.

Employers, it said, should have detailed procedures in place for monitoring the heat index, provisioning water and caring for a sick employee, it said.

Heat advisories are in effect tomorrow for the Northeast, including New York City, Boston, and Philadelphia.

Heat index values — the temperature it feels like when heat is combined with humidity — could top 100 degrees in some areas, generating dangerous conditions for Mid-Atlantic and New England residents.

Albany, New York is soaring above their average of 84 degrees for this time of year, and the city could near their record of 97 degrees tomorrow with the stifling heat.

“This is going to be little bit (warmer) than just the typical hot and humid weather that we get in July,” Mike Evans, a meteorologist at the National Weather Service office in Albany, New York, told CNN.

Portions of Massachusetts will reach record levels as soon as Wednesday, as temperatures reach the upper 90s, and will continue through the rest of the week in the Northeast.

“This is going to be the hottest day we’ve had so far, this summer. We really haven’t had too hot of a summer here, at least in the Northeast,” Evans said.

The US isn’t likely to see much relief over the next week. The Climate Prediction Center forecasts above average temperatures will likely last well into next week for most of the lower 48.