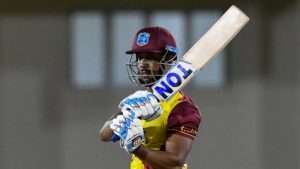 (SPORTS MAX) –  West Indies batsman Lendl Simmons has retired from international cricket, according to an Instagram post from his sports agency 124notout on Monday.

The post further said that Simmons had written a letter to Cricket West Indies last Friday informing them about his decision to become a free agent and pursue opportunities on the franchise circuit.

Simmons’ international career spanned 16 years. He represented West Indies in eight Tests, 68 ODIs and 68 T20Is, scoring 3763 runs across all formats. He made his ODI debut against Pakistan in Faisalabad in 2006. His T20I debut came a year later against England at The Oval and he made his Test debut in 2009 against England in Port-of-Spain.

He is the leading run-scorer in CPL history with 2629 runs from 91 innings including 20 half-centuries.

He also helped the Mumbai Indians to two IPL titles in 2015 and 2017, scoring a total of 1079 runs from 29 innings during his time with the franchise.

He last represented West Indies during the 2021 T20 World Cup.