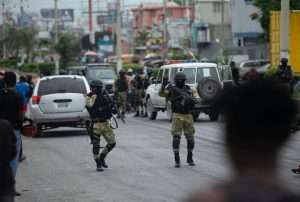 (CMC) – The Executive Director of the National Network of the Defense of Human Rights (RNDDH), Pierre Espérance, says the death toll from the fights among rival criminal gangs in Cite Soleil has reached 300 as Haiti continues to reel from criminal activities.

Espérance, speaking on a radio programme, said as a result of the war in Cité Soleil between the coalition of gangs of the G-9 and G-Pèp, the new toll now stands at around 300 dead and 160 injured, mostly innocent citizens.

The police have not confirmed the statement by the RNDDH official nor have they released any information on reports that businessman Rony Dumont, the husband of the Mayor of the town of Saut-d’Eau, had been killed by his abductors.

Reports said that Dumont, who had been kidnapped on June 13, was killed a month and four days after his abduction despite the payment of four ransoms, according to his wife.

Police are also investigating reports that armed individuals kidnapped journalist Edner Décime, from Alterpress, who was in his vehicle on Sunday, not far from the petrol pump at Delmas 30.

Two youth organisations say 13 per cent of children surveyed in a troubled neighbourhood of Port-au-Prince had been in contact with members of armed gangs who tried to recruit them.