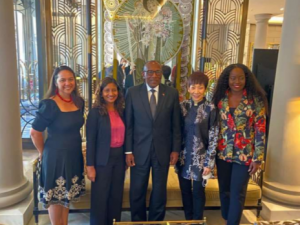 PR –  About thirty-five Climate Resilience and Environment Ministers from across the globe are meeting in Berlin, Germany at the Petersburg Climate Dialogue (PCD).

The dialogue will offer an opportunity for high level engagement to advance discussions on acceleration of global ambition in pursuing a shift towards renewable energy and carbon capture and storage.

Topics include advancing action under adaptation; addressing key aspects of the loss and damage mechanism and accelerating national mitigation action. The convention’s current financial flows fall short of what is needed to achieve agreed climate goals for both adaptation and mitigation actions.

The Petersberg Climate Dialogue offers an opportunity for countries to prepare for the series of negotiations that are part of the annual Conference of Parties on climate change.

The focus of COP27 has been aptly identified as “implementation” of the Paris Agreement and this has taken on new significance as this year, 2022, is the 30th anniversary of the climate convention.

This current decade is critical as the growing adverse impacts associated with climate change across sectors and regions demand the need for scaling up of all actions and ambitions that can transform commitments and pledges into concrete contributions in response to the climate crisis.

Minister James and the delegates are expected to return on Wednesday 20 July, 2022.