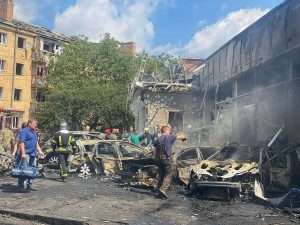 National Police Chief Ihor Klymenko said only six bodies had been identified so far, while 39 people were still missing. Three children younger than 10 where among the dead. Of the 66 people hospitalised, five remained in critical condition while 34 sustained severe injuries, Ukraine’s State Emergency Service said.

“It was a building of a medical organisation. When the first rocket hit it, glass fell from my windows,” said Vinnytsia resident Svitlana Kubas, 74. “And when the second wave came, it was so deafening that my head is still buzzing. It tore out the very outermost door, tore it right through the holes.”

Borzov said 36 apartment buildings were damaged and residents have been evacuated. Along with hitting buildings, the missiles ignited a fire that spread to 50 cars in a parking lot, officials said.

“These are quite high-precision missiles. … They knew where they were hitting,” Borzov told the AP.

“Russia only strikes at military targets in Ukraine. The strike on Vinnytsia targeted an officers’ residence, where preparations by Ukrainian armed forces were underway,” Evgeny Varganov, a member of Russia’s permanent UN mission, said in an address to the chamber.

Among the buildings damaged in the strike was the House of Officers, a Soviet-era concert hall.

Margarita Simonyan, head of the state-controlled Russian television network RT, said on her messaging app channel that military officials told her a building in Vinnytsia was targeted because it housed Ukrainian “Nazis.”

Ukrainian President Volodymyr Zelenskyy repeated his call for Russia to be declared a state sponsor of terrorism. The strike happened as government officials from about 40 countries met in The Hague, Netherlands, to discuss coordinating investigations and prosecutions of potential war crimes committed in Ukraine.

Zelenskyy said that among those killed was a 4-year-old girl named Liza, whose mother was badly wounded. A video of the little girl, twirling in a lavender dress in a field of lavender, was widely shared on social media.

“Today, our hearts are bleeding, and our eyes are full of tears because our family of many thousands has lost one of our own,” the charity Down Syndrome wrote. It said: “They were just on their way from a speech therapy class, and they just happened to be in the wrong place at the wrong time.”

Zelenskyy’s wife later posted that she had met this “wonderful girl” while filming a Christmas video with a group of children, who were given oversized ornaments to paint.

“The little mischievous girl then managed in a half an hour to paint not only herself, her holiday dress, but also all the other children, me, the cameramen and the director … Look at her alive, please,” Olena Zelenska wrote in a note accompanying the video.

Zelenskyy called for creating a mechanism for confiscating Russian assets around the world and using them to compensate the victims of “Russian terror.”