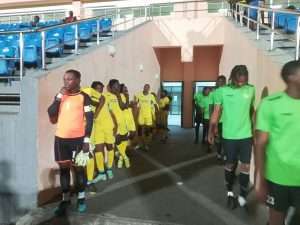 PR – After a break, the Grenada Football Association (GFA) Premier League resumed with a big win for FC Camerhogne over Hard Rock at the Kirani James Athletics Stadium on Wednesday evening.

In a spirited match that attracted fans, Kobe Rigby opened the scoring for Camerhogne in the 12th minute and added two more to seal a hat trick, one being a penalty (34’, 45+1’ (P). Kwasi Theodore added to the score in the 53rd minute while National player Romar Frank found the net in the 64th minute.

At the top of the leaderboard is Hurricanes SC on 38 points followed by Paradise FC International on 36 points while in the relegation zone are Chantimelle FC and Eagles Super Strikers. The new Executive of the GFA led by President Marlon Glean is keen to wrap up both the Premier and Conference Leagues for the present season and therefore met with clubs recently to seek their partnership in completing the competitions.

Presently, there are three rescheduled matches and three full rounds of matches needed to complete the GFA Premier League which was heavily affected by the COVID-19 pandemic. The following are the upcoming matches on the weekend.