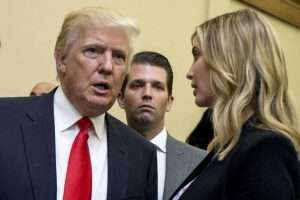 (AP) — Former President Donald Trump and two of his children got their questioning postponed Friday in a New York civil investigation into their business dealings, a delay that follows the death of Trump’s ex-wife Ivana.

The ex-president, son Donald Jr and daughter Ivanka had been scheduled for depositions — a term for out-of-court questioning under oath — starting as soon as Friday. But New York Attorney General Letitia James’ office said it had agreed to postpone them because of Ivana Trump’s death, announced Thursday.

“We offer our condolences to the Trump family,” attorney general’s office spokesperson Delaney Kempner said in a statement.

There are no new dates yet for the depositions.

A message was left with the former president’s lawyer. The younger Trumps’ attorney, Alan Futerfas, declined to comment.

Ivana Trump died at her Manhattan home at age 73. She was married to the former president from 1977 to 1992, and they had three children together: Donald Jr, Ivanka and Eric.

The medical examiner’s office hasn’t released a cause of death.