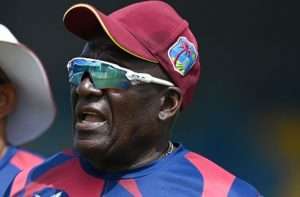 West Indies were hammered by nine wickets after mustering a paltry 108 off 35 overs – their second lowest-ever total against the Tigers – to go two-nil down in the three-match series.

The defeat was their second in four days after losing the opener by six wickets on Sunday after a similar lacklustre batting effort where they managed only 149.

“We’re still planning for the 2023 [World Cup]. We know the areas we’re falling down in, we know that teams are going to come and bowl a lot of spin against us and we’ve got to find ways to make sure we get better at rotating the strike and different things like that,” he said.

The toss has played a key role in both matches, Bangladesh calling correctly on both occasions and opting to bowl on Guyana National Stadium pitches with plenty of moisture, due to the heavy recent rain.

However, Estwick said West Indies batsmen had failed to adapt, and pointed to all-rounder Keemo Paul, who top-scored with an unbeaten 25 on Wednesday, as the template for batting in the conditions.

“We didn’t adjust to the conditions. We obviously struggled to get any kind of momentum,” Estwick pointed out.

“[The other team] winning a toss should not mean you’re going to lose a game. We’ve got to find a way to counteract these spinners, to play this spin a lot better. They’ve been causing us a lot of problems but it’s not for a want of trying. The boys are trying. It’s finding a way that’s going to be very very important for us going forward. We’ve still got one more game to play – we continue to learn and I hope we can take some lessons away from it,” Estwick said.

Despite the tricky nature of the pitches, Estwick refused to use conditions as an excuse for West Indies’ poor performances.

“I don’t want to be too critical because people will say you’ve lost and Bangladesh have batted on them,” Estwick noted.

“I thought this one (pitch) was a bit better than the first match. I thought the first match had a lot of moisture. But you’ve got to understand that there’s been a lot of rain around Georgetown and groundsmen can’t put in as much work as they would like, so you don’t want to be too critical,” the assistant coach said.

“Bangladesh have won the toss and they’ve put us in both times. Normally Bangladesh like to try and set a score and put you under pressure but they’ve gone away from that because of the surface. But like I said, there’s been a lot of rain and the pitches are under covers for most of the time and it’s going to be very difficult, once you bat first, to get any sort of momentum,” Estwick said.

The final ODI is set for Saturday at the same venue.