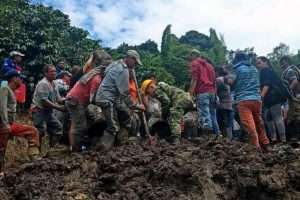 (AFP)— At least eight children are believed trapped in northwest Colombia after a landslide buried a school on Thursday, local authorities said.

Video footage shared on social media showed dozens of villagers with shovels trying to remove a heap of felled trees and rubble.

Daniel Quintero, the mayor of Medellin that is the capital of the Antioquia department where the landslide took place, issued an alert on Twitter about a landslide burying a school by the name of El Porvenir.

Eliana Rincones, the school’s only teacher, told journalists there were 22 children present at the time of the landslide.

“We were at recess when suddenly we heard something very loud; we all turned (to look) and in a matter of seconds we all ran,” she said.

“We didn’t even know where we were running.”

The deluge was the result of heavy rains plaguing much of Colombia due to the cyclical La Nina weather phenomenon.

The rains are projected to continue until September, according to the meteorological institute.