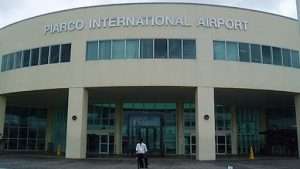 (TT GUARDIAN) – The Piarco International Airport was forced to suspend runway operation just after 7 am on Wednesday. The cause? Dogs running loose on the runway.

Several flights were grounded as a result of the runway closure—including flights to Tobago, the US, St. Vincent & the Grenadines, and Jamaica.

BW1503 departed Crown Point, Tobago at 7:17am but was forced to return after circling for over 30 minutes over the Gulf of Paria. That flight was only able to depart for Trinidad at 9:20 am. D51320, a DHL cargo flight inbound from Curacao was also forced to divert to Bridgetown, Barbados.

Corporate Communications Manager for the Airports Authority Zola Joseph confirmed the incident, telling Guardian Media the situation was “quickly contained”. Flight operations resumed just before 9 am with BW1504 being the first plane to depart.

It remains unclear how the dogs were able to access the runway, as well as their current state.