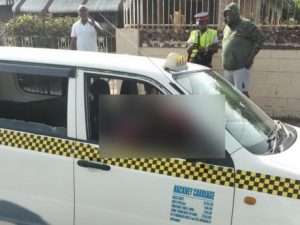 A woman and a child are now in hospital.

The deceased are yet to be identified.

The dead are a male taxi driver and a man who was in the front passenger seat.

It is reported that the taxi was travelling along the roadway when it came under heavy gunfire about 8:30.

The police were called to the scene.

The area has been cordoned off and traffic diverted.