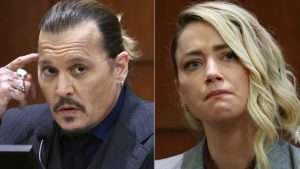 (AP) – The Johnny Depp-Amber Heard libel trial, which generated intense interest for two months earlier this year as a livestreamed, no-holds-barred soap opera featuring one of Hollywood’s biggest stars, is not fading away quietly.

Earlier this month, Heard’s lawyers filed a 51-page motion asking Judge Penney Azcarate to set aside the jury’s verdict, which gave $10 million to Depp and $2 million to Heard on competing defamation claims.

The motion cites multiple reasons that the verdict is untenable, from the surprising decision to declare both sides victorious to one extent or another, to a bizarre case of mistaken identity with one of the jurors.

Among the issues raised:

Depp sued for $50 million in Fairfax County after Heard wrote a 2018 op-ed piece in The Washington Post about domestic violence in which she referred to herself as “a public figure representing domestic abuse.” The article never mentioned Depp by name, but his lawyers said several passages in the article defamed him by implication by referring to highly publicized abuse allegations she made in 2016 as she filed for divorce.

Heard then filed a $100 million counterclaim, also for defamation. By the time the case went to trial, her counterclaim had been whittled down to a few statements made by one of Depp’s lawyers, who called Heard’s abuse allegations a hoax.

The jury awarded $15 million to Depp and $2 million to Heard on her counterclaim. The $15 million judgment was reduced to $10.35 million because Virginia law caps punitive damages at $350,000.

Heard’s lawyers say in court papers that the $10 million verdict is unsupported by the facts, and seems to demonstrate that jurors failed to focus on the fallout from the 2018 op-ed piece — as they were supposed to do — and instead just looked broadly at the damage Depp’s reputation suffered as a result of the alleged abuse.

Depp’s lawyers, though, say the damages are supported by testimony from his agent and others. They say the precedents cited by Heard’s team to support her arguments “are decades old, and none involves an international A-list celebrity.”

Steve Cochran, a civil lawyer in Virginia who was appointed by a judge as a neutral conciliator in the case to try to minimize pre-trial discovery disputes, said he always believed the weakest link in Depp’s case was the damages, given evidence that the actor’s reputation had been ruined in Hollywood well before the publication of the op-ed. Still, he said he’s sceptical that Heard can get the verdict set aside.

Scott Surovell, a lawyer and Democratic state senator who practices law in Fairfax, also said he sees little reason to set aside the damages.

Heard’s lawyers argue that the verdicts for Depp on one hand and Heard on the other are fundamentally nonsensical.

“The jury’s duelling verdicts are inconsistent and irreconcilable,” her lawyers wrote.

Depp’s lawyers, though, say the verdict form used by jurors allowed them to express with specificity exactly which statements they found defamatory. When you look at the individual statements, they say, the duelling verdicts make sense.

Jeremiah Denton III, a Virginia Beach attorney with experience in defamation cases, said he doesn’t view the verdicts as irreconcilable. If anything, he said, the award most in jeopardy is the $2 million given to Heard, because he said it’s legally dubious that Depp can be held liable for statements made by his attorney.

“I don’t understand why the judge even allowed that issue to go to the jury,” he said.

One of the more unusual items in the discussion is a case of apparent mistaken identity with one of the jurors. According to court papers, a 77-year-old county resident received a summons for the trial. But the man’s son, who has the same name and lives at the same address, responded to the summons and served in his stead.

Heard’s lawyers say Virginia law is strict about juror identities, and the case of mistaken identity is grounds for a mistrial. They have presented no evidence that the 52-year-old son, identified in court papers only as Juror #15, purposefully or insidiously sought to replace his father, but they argue that possibility should not be discounted.

“The Court cannot assume, as Mr. Depp asks it to, that Juror 15’s apparently improper service was an innocent mistake. It could have been an intentional attempt to serve on the jury of a high-profile case,” Heard’s lawyers wrote.

Paul Bekman, a Baltimore lawyer who has also tried cases in Virginia, said Heard’s team needed to raise any issues about the juror ahead of time.

“Anybody looking at a 52-year-old and a 77-year-old would be able to tell — hopefully — that there’s a difference of 25 years, and they would have the right to inquire about that,” he said. “I believe it is too late to complain about the juror.”

Cochran also said he was sceptical that the confusion could result in a mistrial or the judge setting aside the verdict, but he cautioned that it’s difficult to predict because the issue is so rare.

“I’ve been practicing for 50 years and never seen that issue come up,” he said.