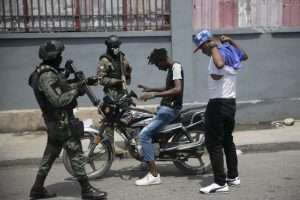 (AP) — Dozens of people have died in four days of gang battles in a violent neighbourhood of Haiti’s capital, the latest eruption of bloodshed in a wave of increasing violence sweeping the country, local officials said Tuesday.

Jean Hislain Frederick, deputy mayor in Cite Soleil district of Port-au-Prince, said that the fighting erupted Friday in a clash between members of two rival gangs and that at least 50 people had died and more than 50 were wounded.

The violence began just a day after the first anniversary of the assassination of President Jovenel Moïse. Since Moïse was killed, violence has soared in Haiti as gangs battle over territory, and the government has struggled to crack down.

The aid group Doctors Without Borders said that thousands of people were trapped in Cite Soleil without drinking water, food and medical care.

The organisation called on other humanitarian groups for help and it urged the gangs “to spare civilians.” In a press release, it said three of its members were treating wounded people in an area of Cite Soleil called Brooklyn.

“Along the only road into Brooklyn, we have encountered corpses that are decomposing or being burned,” Mumuza Muhindo, Doctors Without Borders head of mission in Haiti, said in the statement. “They could be people killed during the clashes or people trying to leave who were shot — it is a real battlefield. It is not possible to estimate how many people have been killed.”

The G9 is a gang coalition also known as G9 Family and Allies, led by a former police officer, Jimmy Cherizier.

Known as “Barbecue” Cherizier has been linked in the past to massacres, and his coalition is believed to have allied with Moïse’s right-wing party. After the president was killed, he called the crime “cowardly and villainous.”

G-Pep is a gang that arose in Cite Soleil, although it is allied with other armed groups from around Haiti’s capital.