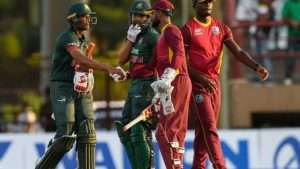 (SPORTS MAX) – Bangladesh condemned the West Indies to a second consecutive defeat, this time by nine wickets, to take an unassailable 2-0 lead in their three-match ODI series at Providence in Guyana on Wednesday.

Asked to bat by the tourists, the West Indies struggled to find runs, scoring 27 in the first 10.3 overs when Kyle Mayers was bowled for 17 by Mossadek Hossian.

Nasum Ahmed bowled Shamarh Brooks for five and Captain Nicholas Pooran for a duck and also removed Shai Hope for 18 as the West Indies slumped further into the mire at 45-4.

Vice-Captain Rovman Powell and Brandon King briefly offered some respite with a fifth-wicket stand of 24 before Powell skied one from Shoriful Islam and was caught by Mahmudullah for 13.

King followed shortly thereafter dismissed for 11 by Mehidy Hasan Miraz, who also got the wickets of Romario Shepherd (4), Alzarri Joseph (0) and Gudakesh Motie (6) to finish with figures of 4-29 from eight overs.

Before he got out, Motie and Keemo Paul, who remained unbeaten on 25, carried the score past 100 before the former was dismissed as the West Indies were all out for 108 in just 35 overs.

Needing 109 for victory, Bangladesh lost Najmul Hossain Santo for 20 at 48. However, there were no further hiccups as Tamim Iqbal ended unbeaten on 50 and Litton Das 32 as Bangladesh achieved their target in just 20.4 overs.

The pair shared in an unbroken stand of 64 that took the tourists to 112-1 and o the series win.

The teams meet again at the same venue on Saturday.