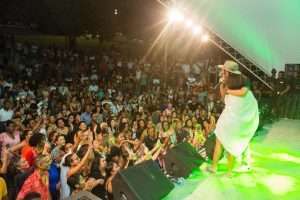 “Is only love does do this. We doing this for you, Danielle. Yuh see this woman, yuh see this woman here, yuh see my sister. Allyuh make some noise for Danielle for meh, please,” an emotional Kees said, pointing at the filmmaker, dancing stage side, with tears in his eyes.

Danielle is in urgent need of a kidney transplant. The director, producer and writer has remained on dialysis since being diagnosed with end-stage renal failure three years ago.

Slated to close her Staying Alive benefit concert at the Chaguaramas venue, on Saturday night, Kees was only allowed one song by police officers after the event had gone past its 12.30 cut-off time.

The Palmiste-born hitmaker turned one song into an emotional medley of his hits. Backed by the musicians of his self-titled Kes The Band, he first sang his Carnival 2019 hit “Savannah Grass” before dropping the chorus lines for his chart toppers “Hello”, “Jolene” and “People” atop the beat.

“This go be the longest song in the world, if yuh know yeah, then yuh know yeah,” Kes teased as agitated senior officers were seen tapping their watches angrily stage side, while several of their subordinates mouthed the chorus lines verbatim.

Earlier, Machel Montano made an emphatic return to a local stage with a highly energetic and emotive display dedicated to Danielle. In his first performance on local soil since Covid-19 lockdowns in 2020, Montano praised the filmmaker’s strength and resilience. “It’s not no ordinary strength, it’s the strength of a woman. Danielle, I just want you to know we have your back. We stand with you,” Montano said.

The soca monk called on all men in T&T to show greater reverence and love for women. There has been a noted increase in violent crimes against women in recent years in T&T.

“The woman is the sweetest part of creation, that’s where we all came from. I feel in Trinidad and Tobago right now, the men, we have to stand for the women. We have to understand how to respect, how to be responsible and, most importantly, how to respond in love,” Montano said bowing on one knee to Danielle.

Montano told the festive crowd in his 40 years of music he has learnt that love is the ultimate healer. The Carenage-born global soca star made regional and international headlines after completing Indian yogi Sadguru (Jagadish “Jaggi” Vasudev) Sadhanapada’s programme and appearing at his Maha Shivratri in March. He went on to actively tour with the yoga guru to promote the Save Soil farming initiative.

“I have been hated, but never has it ever trumped being loved. I have been loved by so many. The only way you reach this far up, for so long and go high enough to look down and see a long line is love. I look back at the mistakes, at the breaks, but most importantly the love, the experience with people. I love my experiences with Trinidad and I hope there will be many, many more of those exciting times,” Montano said.

Several musicians and entertainers gave their talent and time to the event all in the name of helping Danielle Dieffenthaller. Rapso group 3Canal, rock band Orange Sky, new calypso collective Freetown and the Trinidad All Stars Steel Orchestra were among the other bands to appear.

It was Danielle herself, however, who would have the last word on a moving evening of energy exchanges. Called forward by her soca star brother Kees to “say something” an emotional Danielle did not hold back her tears of gratitude.

“Wow!” the overwhelmed filmmaker exclaimed, inspiring a swell of cheers from the crowd, among them several musicians, visual artists and political figures.

“I get to witness this love while I’m still alive. I get to celebrate my life, and it’s all thanks to you guys. I have to thank my brother Johann. In the beginning if he didn’t jump out and reassure me, I wouldn’t have reached this far. To each and every one of you, celebrating with us, please take care of your health,” Danielle said.