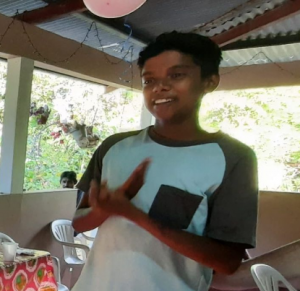 (TT GUARDIAN) – A tragic accident has claimed the life of Kareem Ali, 16, of Jagessar Street, Aranguez, just 10 days after his birthday, leaving his family and community in shock.

The only son of his parents, Ali’s head was crushed between the gate of his family home and a pole installed to catch it if it fell.

He was attempting to close the gate around 9.45 am yesterday behind his father after they returned home from signing him up for a cricket class in Felicity.

“The gate now, is have stone in the tracks (so) when he pull it hard and it jump off the track—it’s a big, heavy gate, it’s almost 12 feet—and he head get pinned between the ‘I’-beam and the gate and it end up bursting his head and end up bleeding,” his father, Rishad Ali, 38, recounted.

His mother, Nalini Chunilal, 39, said she heard his screams while washing behind their home.

“I just hear this screaming so with the scream now I thinking is bandits so I looking to run the opposite direction, only to run out and see they driving out with the van and I see the gate fall on him,” she said.

Ali’s father said he immediately called relatives who lived on the compound and neighbours to assist with removing the gate. He was pronounced dead at the hospital.

“He only turn 16 on the first of this month and he’s a child, I didn’t give him anything, all I bought is a cake and he was humble with that. That make he day. He was never a greedy child, a child to ask for anything. Whatever you give him he was always humble,” his mother said.

One relative blamed Ali’s death on the gate’s safety feature being installed too far away from it. The gap appeared to be roughly one foot away from the track. The relative believes it needed to be closer to two inches away to immediately catch the gate without the possibility of someone getting caught between it. Despite this, Ali’s father, a farmer, is left blaming himself.

“(This) was the only morning I take off from the garden to carry him to register because I always working 6 (am) to 6 (pm)- sometimes I only eat one doubles for the day- just trying to make ends meet, trying to work my garden good just for he alone because it’s one son (I have). I trying to provide everything for him. I guess, like, I wasn’t successful enough to make him happy so I just don’t know what wrong I must be do,” he said.

Despite his tragic end, his father said their last day together was memorable.

Ali was a Form Four student at the Vishnu Boys’ Hindu College, studying modern studies. His parents said he wanted to work with animals.

His family is still completing all legal requirements before setting a date for his funeral.