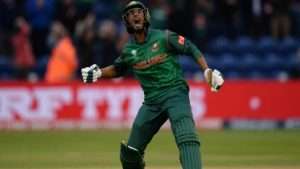 (SPORTS MAX) – After being shut out in the respective Test and T20 series, Bangladesh struck back on Sunday to defeat the West Indies by six wickets to take a 1-0 lead in their three-match ODI series at Providence in Guyana.

In the match reduced to 41 overs because of a wet outfield, Bangladesh won the toss and sent the West Indies in to bat. The home side was in early trouble losing Shai Hope first ball, bowled by an inswinger from Mustafizur Rahman for nought.

On a pitch of uneven bounce and taking spin, the West Indies struggled to rotate the strike. They lost Kyle Mayers for 10 in the 12th over when the score was on 32. It would get a lot worse eight overs later when after limping to 55-2, they lost Brandon King and Shamarh Brooks off consecutive deliveries of the 21st over bowled by Shoriful Islam for eight and 33, respectively.

The dismissals brought together Captain Nicholas Pooran (18) and Vice-Captain Rovman Powell (9), who together put on 20 for the fifth wicket. Mehidy Hasan Miraz removed both in quick succession to have the West Indies tottering on 91-6.

Shoriful picked up his third and fourth wickets with the dismissals of Romario Shepherd for 15 and Gudakesh Motie for 7, which along with the run out of Akeal Hosein for 3, saw the West Indies stumble to 110-9 in over 35.

Jayden Seales and Anderson Phillip, who were unbeaten on 16 and 21, respectively put on 39 for the last wicket to take the West Indies to 149-9.

Needing 150 for their first victory of the series, Bangladesh lost the wickets of Liton Das for 1 with the score at 9 and Tamim Iqbal for 33 when the score was 49 but still raced to 77-2 after 13 overs.

The tourists would lose the wickets of Najmul Hossain Shanto for 37 and Afif Hossain for nine as Bangladesh closed in on the victory but Mahmudullah 41 not out and Nurul Hasan (20) ensured that there would be no further jitters as they eased to 151-4 with 55 balls to spare.

Motie, who dismissed Shanto for the first wicket of his international career, bowled well for figures of 1-18 from nine overs while Pooran took 1-39 from seven. Akeal Hosein took 1-43.