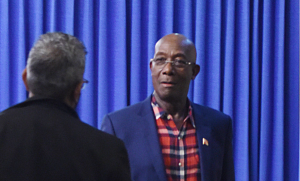 Speaking at a post-Cabinet media briefing at the Diplomatic Centre, St Ann’s, yesterday, the Prime Minister did not mince his words about the impact these thefts have on the country.

“There are persons in the society who are now taking the position that they do not care who they harm, but they make a living by destroying our infrastructure to market the material from which the infrastructure is made,” Rowley said.

Several weeks ago, thieves hit a Water and Sewage Authority (WASA) booster station in Thicke Village, Siparia, leaving some 40,000 customers without a pipe-borne supply of water.

But that was only the latest in a long line of incidents, as scrap iron thieves have been wreaking havoc on State infrastructure across the country.

The most prevalent theft has been that of overhead cables belonging to the Telecommunication Services of Trinidad and Tobago (TSTT.) In the past two years, two people were electrocuted while trying to steal overhead lines and a third was shot dead by a Carapichaima resident after he and two others tried stealing lines in Central Trinidad.

Dozens of residents were affected by that incident, which was strongly condemned by Public Utilities Minister Marvin Gonzales.

That incident had come just days after the Trinidad and Tobago Scrap Iron Dealers Association (TTSIDA) called for a ban on copper exports.

But yesterday, the Prime Minister hinted he may go much further.

“As a matter of national security, I have asked the Attorney General to consider whether we should not from here on in, and for some significant period of time, prevent the marketing of used metals in Trinidad and Tobago,” he said.

Rowley said the thieves do not care about how many people they hurt by their actions.

“Certainly, we are not producing those metals in this country, we import for a particular purpose and when they are put to use, other people are coming to take them out to sell them, so the first thought is that we do not trade in them to deny the incentives for the thieves to take them out,” Rowley said.

When the idea of a ban was raised weeks ago, Trade and Industry Minister Paula Gopee-Scoon initially said this was not something the Government was considering.

But her Cabinet colleague, Public Utilities Minister Gonzales recently threw his support behind the suggestion.

“I support that 100 per cent because the madness that we have now descended to as a country, in now attacking our utility infrastructure, be it WASA, be it TSTT, be it Petrotrin, Ministry of Works and Transport, manhole covers, this nonsense has to stop, and if they are putting forward a proposal to outlaw the export of this thing I fully support it,” Gonzales said at that time.

Guardian Media reached out to the Trinidad and Tobago Scrap Iron Dealers Association for their reaction to the Prime Minister’s comments. However, TTSIDA president Allan Ferguson said the association will hold a media conference today to address the issue.