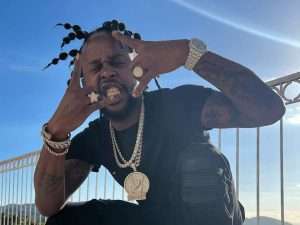 (JAMAICA GLEANER) – An International Criminal Police Organization (Interpol) green notice alerting authorities to a drugs-related conviction may have led to the immigration issues faced by Jamaican dancehall artiste Popcaan in the United Kingdom on Tuesday.

A green notice, according to the global body, is issued to member countries to “provide warning about a person’s criminal activities, where the person is considered to be a possible threat to public safety”.

Attorney-at-Law Bert Samuels has asserted that for some time now his client has been the subject of questioning by immigration personnel in the UK to what he says is a ‘red alert’ placed against his name by the Jamaican Government.

The Jamaica Constabulary Force (JCF) says it has not issued a stop order for the artiste, echoing a statement issued earlier from Foreign Affairs and Foreign Trade Kamina Johnson Smith that said the government had nothing to do with the artiste’s “stop and check” at the Heathrow airport in London.

She said Popcaan has been released.

Samuels, however, is rejecting claims that the government has nothing to do with how British immigration authorities deal with his client.

“It is obvious that it is not a British problem, so who is it?…let the jury come in with that verdict,” he said, noting that it was “obvious” who was.

He argued that his client’s UK visa would have been revoked if the British government had fault with him.

The Jamaican police say Interpol issued the green notice on the entertainer in 2015. It was reconfirmed in 2018.

“Arising from those arrests and other intelligence gathered, a green notice was generated,” it says

It also added that travellers may be subjected to “secondary security screening at international airports for a variety of reasons and these reasons fall completely within the purview of the local authorities in those respective jurisdictions”.

On Tuesday, Sutherland spent almost four hours in interrogation.  Samuels received a call Wednesday from the Jamaican High Commission in London, that officials there would help the entertainer who lamented enduring embarrassment whenever he travels to England.

According to his attorney, Popcaan had been subjected to interrogation by British immigration personnel on at least 10 previous occasions whether as an in-transit passenger or a visitor to the country.