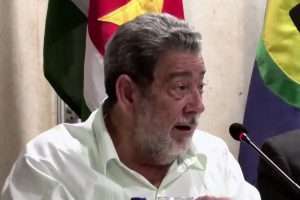 (CMC) – Caribbean Community (CARICOM) leaders have agreed on a new modern Multilateral Air Services Agreement (MASA) that will allow for a new framework within which air transportation will operate in the region, St Vincent and the Grenadines Prime Minister Dr Ralph Gonsalves has said.

He told the news conference marking the end of the 43rd CARICOM Summit here on Tuesday night, that countries, particularly those in the Eastern Caribbean, and even Trinidad and Tobago being severely affected by the loss of thousands of seats “because LIAT as it was is no longer before us.

“You did not realise it while COVID-19 (coronavirus) was on but after COVID has receded somewhat and people are travelling again we see the problems. So a discussion has taken place between the prime ministers of Antigua and Barbuda, Grenada, St Lucia, St Vincent and the Grenadines, Barbados and Guyana and I happen to know Prime Minister (Roosevelt) Skerrit of Dominica will be involved in this”.

Gonsalves said that given St Kitts-Nevis is in “an election cycle”  and was not represented at the summit that ended on Tuesday, “we have taken a decision between those countries …that we are going to address the issue of a regional air carrier of some kind, may well be the revival of LIAT in some form or the other, but we have to get a consultant in the area of aviation to put the framework together and some numbers as a matter of urgency for us to move on”.

He said while that is taking place, he has been given responsibility to “coordinate certain things to get that going and then we get the terms of reference in order for such an exercise and to have a further conversation at the leadership level”.

Gonsalves said that such a meeting could possibly take place in either St Vincent and the Grenadines or St Lucia sometime in the period between the 28 and the end of July…to advance this question in a very practical manner.

According to the communique issued following the summit, the regional leaders “considered the region’s need for a significantly enhanced transportation system that can bolster food security and deepen regional integration”

It said that they welcomed an update from the Prime Minister of Barbados Mia Mottley on advanced discussions with the United Arab Emirates regarding support for both a traditional ferry and fast ferry service for the region and noted that a related proposal from the Capital Abu Dhabi is being awaited.

“Heads of government requested the Caribbean Development Bank (CDB) to commence the proposed roadmap study on the factors needed for successfully establishing a fast ferry service for the transportation of agricultural produce – with an initial focus on trade between Guyana, Trinidad and Tobago, Grenada, and Barbados,” the communique said.

They also agreed to establish a Working Group to provide oversight of the project which will include representatives from the governments of Barbados, Grenada, Guyana and Trinidad and Tobago, as well as the CARICOM Secretariat, CARICOM Private Sector Organisation (CPSO), and the CDB.

Gonsalves told reporters that the meeting had also discussed “I would say broadly some residual issue from LIAT (1974) Limited that discussion is inconclusive matters in which we do not have any legal obligation but there may well be a moral obligation for us to address certain things …and we will seek to do so in a coordinated way”.

The airline is owned by the governments of Antigua and Barbuda, Barbados, Dominica and St Vincent and the Grenadines (SVG). Antigua and Barbuda Prime Minister Gaston Browne said previously that a decision had been taken that would allow Barbados and SVG to turn over their shares in LIAT to St John’s for one EC dollar (One EC dollar=US$0.37 cents).

Earlier this year, Prime Minister Browne appealed to Caribbean trade unions to re-think their positions regarding the latest offer made to laid-off workers of the airline.

The Antigua and Barbuda government said it was providing two million dollars “to meet partial satisfaction of the cash component of the compassionate pay-out” to former local employees of the regional airline.

Late last month, the Leeward Islands Airlines Pilots Association (LIALPA) said that terminated workers have been on the breadline since April 2020 and are in dire straits.

The pilots said they hoped the shareholder governments would emulate the “commendable responsible leadership” of St Lucia Prime Minister Phillip J. Pierre, who announced that his administration would be honouring the debt of the St Lucian workers of LIAT.