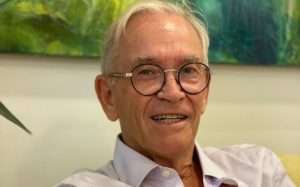 (BARBADOS TODAY) – Businessman Stephen Hobson says a fast ferry service between Barbados and Eastern Caribbean states will not have a negative impact on air travel.

In fact, he suggests, it will result in cheaper airfares and therefore increased travel, while also providing numerous opportunities for new and existing entrepreneurs and small businesses.

Hobson, chairman of the NSG Group which is examining a cargo ferry service between Barbados and Guyana, used Trinidad and Tobago as an example of how airfare costs would decrease and there would be more flights.

“Passenger loads went through the ceiling. It went from typically less than 300 000 a year on the existing ferry service, and the first year we started the fast ferry service the passenger load went up to 860 000 in one year; it more than doubled. That service today carries well over a million passengers a year,” he added.

Hobson further explained that with the fast ferry service, people in Trinidad were able to book a flight to Tobago, shop, and then return to Port of Spain on the ferry with bulky items that a plane could not accommodate.

“People say to me, ‘if you start this service you are going to kill the air bridge’. I said ‘no, I don’t think so’. And I have been proven absolutely right – that more people use the air bridge now than they were before the fast ferry service started,” the businessman insisted.

“It is simple: the stimulus to the local economy is such that some people choose to fly there and buy what they want, put them on the ferry and come back because the plane can’t take it. That is exactly that type of situation I envisage here – that you would find people, for example, fly from St Vincent, buy what they want that they can’t get in St Vincent and can’t take on the plane because it is too big and too heavy, go down to the [Bridgetown] Port and catch the ferry back to St Vincent,” explained Hobson, one of several private sector interests who attempted to take over LIAT some decades ago. He was also an investor in the short-lived airline Carib Express.

Hobson told Barbados TODAY that while travelling extensively across the region for the past 50 years executing various projects, he “became convinced that the majority of people in the Eastern Caribbean, particularly, are almost prisoners in their own island in the sense that the cost of getting from A to B is so prohibitively expensive”.

“It almost makes it impossible for the majority of people to travel. LIAT, there is no doubt about it, provides an absolutely vital primary service and that is why I was interested in the first place in acquiring LIAT, because I thought a private sector thrust could deliver better service on better terms for the passengers,” he said.

“The reality is . . . fares are driven by what it costs to operate, and when you have relatively small aircraft, the seat-mile costs are very high which explains why the fares are so high. Look at the ridiculous situation we have at the moment [where] it is often cheaper to fly to Miami than it is to fly to St Vincent, for example. The second major consideration is the ability for the islands to trade between themselves,” he said.

Identifying the additional benefits of having a fast ferry service, Hobson said it would create opportunities for small schooners, taxi drivers, duty-free shops, tour operators, guest houses, and others in the tourism industry.

The businessman added that it would also create the opportunity for schoolchildren and various non-governmental organisations in each territory to travel easily and more affordably for learning purposes, adding that the ferry would have a small area for children to play, a business section, and even cafes on board.

“It is like a mini cruise. The idea would be that you leave Barbados and that vessel goes via St Vincent, St Lucia, Grenada and ends up in Trinidad that evening,” Hobson explained, adding that it would also allow tourists to island-hop and more easily experience multiple regional destinations.

Hobson explained there would also be opportunities for entrepreneurs to develop the software required for the booking processes that could be shared between airlines and other small vessel operators.

“These are the kinds of things you have to think about and these are the considerations,” said Hobson. “We have analysed over the course of the last ten years, the viability of the service and there is no doubt about it, the theoretical return is good.”