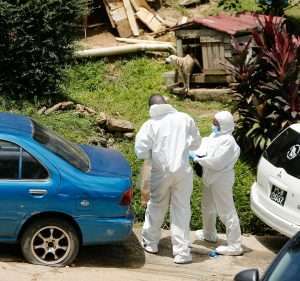 (TT GUARDIAN) – A 51-year-old man was stabbed to death by a close male relative in Laventille and two men were killed and one wounded in a shooting in Cocorite between Saturday night and Sunday morning.

These latest three killings and two more in south Trinidad raised the number of citizens killed over the weekend, including police-involved shootings, to 18, as the country continued to reel from the latest spate of violent crimes.

The latest series of killings began with the murder of Dexter Benjamin on Saturday night.

According to reports, around 7.50 pm, Benjamin was at his Chocolate Alley, Sogren Trace, Laventille home, when he had an argument which quickly became violent with his 35-year-old relative.

The relative reportedly drew a knife and stabbed Benjamin several times before fleeing the scene.

Police found Benjamin lying unconscious in a track near his home and he was pronounced dead on the scene by a District Medical Officer (DMO).

Benjamin’s 68-year-old wife was at home at the time but escaped unscathed.

Homicide detectives attempted to locate the relative, who cannot be identified until he is charged, but he was not detained up to late yesterday evening.

In the next incident, 30-year-old Geovani Jones-Lashley, 21-year-old Shemuel Robinson and 23-year-old Dwight Lewis, all of Upper Waterhole, Cocorite, were liming near their homes around 9.30 am yesterday when they heard a volley of gunshots.

The men attempted to run away but were all wounded.

Jones-Lashley and Robinson succumbed to their injuries while Lewis, who was shot in his leg, was taken to hospital for treatment.

Guardian Media understands that Lewis told police he did not see who shot at him and his friends, as he began to run upon hearing the gunshots and did not look back.

When a news team from Guardian Media visited the community several hours after the shooting yesterday, the location was still cordoned off and crime scene investigators were seen scouring the area for clues and evidence.

While residents were helpful in assisting media personnel in finding vantage points in the hillside community to capture footage of the crime scene, they declined to comment on what transpired.

Detectives of the Region One Homicide Bureau are continuing investigations into all three murders.

Meanwhile, police are investigating an incident in which a man was shot while helping a friend repair his car, which had stalled along the Churchill Roosevelt Highway in Arima on Saturday night.

Police said the incident occurred around 9.30 pm as the 35-year-old man was helping his friend to repair his car which began experiencing mechanical issues near Tumpuna Road in Arima.

A car pulled alongside their vehicles and the driver got out, drew a firearm and attempted to rob the friends.

The victim attempted to run away and was shot in the right arm by the man, who then returned to his vehicle and drove away. The victim was taken to the Arima District Hospital, where he was treated and discharged.