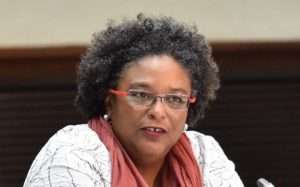 (CMC) – Prime Minister Mia Mottley says the death of a family of four during the early hours of Monday morning “has really hurt my heart” and appealed to Barbadians “to hold up each other and to hold up for the trauma that we feel collectively as a people.

“Early this morning in Suriname, I woke to the tragic news of the explosion and the loss of four lives – two young children 10- and 12 years old, and two adults. I really want to say that my heart literally goes out to the extended family and I’m sure that all Barbadians do and that we would want to keep the extended family in their prayers,” said Mottley, who is in Suriname attending the 43rd Caribbean Community (CARICOM) summit that ends on Tuesday.

Police said that the bodies of 49-year-old contractor Anthony Lovell, his wife, attorney-at-law Allison Lovell, 46, and their two children Alexander Lovell, 10, and Abriel Lovell, 12. Were discovered in a home in St. Phillip on the south-east coast of the island.