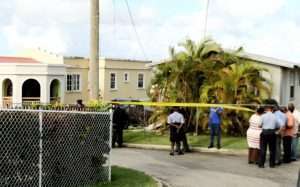 (CMC) – Police have identified the bodies of four people found in a home in St. Phillip on the southeast coast of the island, during the early hours of Monday.

Police have named them as 49-year-old contractor Anthony Lovell, his wife, attorney-at-law Allison Lovell, 46, and their two children Alexander Lovell, 10, and Abriel Lovell, 12.

Media reports said that the bodies were found in one bedroom of their home following what neighbours said sounded like an explosion followed by a fire.

Acting police public relations officer, Inspector Stephen Griffith, said lawmen received a report of a fire at the residence around 3:30 am (local time).

“Just after 3.30 this morning, the police received a report of a fire …on arrival along with the Barbados Fire Service it was discovered that four bodies, the bodies of two adults and two children were in the home.

“Investigations are continuing into this matter and we will not give at this time the (names) of the deceased persons since we are trying to contact family members,” Griffith told reporters at the scene.

He said, “no one has given any indication as to the cause of this matter and we are seeking the public’s assistance and anyone who has information which can assist us to call the police hotline….or crime stoppers”.