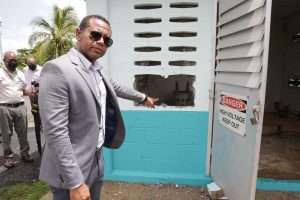 (TT NEWSDAY) – Thieves sabotaged a WASA booster station at Fyzabad on Wednesday night, stealing an undisclosed quantity of cables and cutting off water access to over 40,000 people in the process.

During a tour of the facility yesterday, acting Chief Executive Officer of WASA Kelvin Romain said it was a well-orchestrated job. He said when the 1,200 Kilovolts high tension power lines toppled, the thieves punched a hole in the concrete wall of the facility before removing all the cables.

“Supply was cut and then they took that high voltage cable. They created a hole in the wall to complete the retrieval of the cable. They then took this other cable behind this wall. So T&TEC and WASA infrastructure were taken,” Romain added.

Calling for a ban on all copper trade, Romain said WASA will move to install CCTV cameras at all facilities and boost security, as the incidents of theft were becoming more prevalent.

He noted that operators are frequently on-site checking instruments but the thieves struck sometime after midnight and 5.45 am.

He said more has to be done to combat the copper exportation trade.

“I share the view to ban the exportation of copper. It is a national issue we have to deal with. Just driving up here alone, we see a lot of cables have been cut,” he said.

He noted that 50 per cent of the plants had been brought back on stream following Tuesday’s inclement weather.

He said the “dastardly act of sabotage” had affected 40,000 people.

“We have 20,000 directly affected. This booster supplements some of the supply at the Penal Water Treatment plant. We will definitely boost security in and around installations. It is not the first time we had theft.”

He could not divulge the value of the cables.

Asked whether it was an inside job, Romain said he would not say that. However, he said it was clear someone had the site under surveillance.