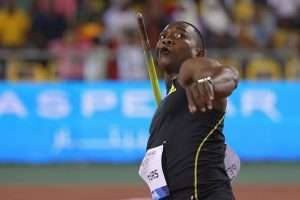 (SPORTS MAX) – Anderson Peters set a new meet record in the javelin while there were podium places for Rushell Clayton and Kyron McMaster at the Diamond League meeting in Stockholm, Sweden on Thursday.

Peters, who must now surely be favoured to win the gold medal at the 2022 World Athletics Championships in Eugene, Oregon next month, threw 90.31m breaking the previous mark of 89.78m set by Norway’s Andreas Thorkildsen in 2006.

In winning, the Grenadian had to overcome a national record and personal best mark by India’s Neeraj Chopra, 89.94m, which was his opening throw. Julian Weber was third with his fifth-round mark of 89.08m.

After overcoming an injury that kept her out for an entire 2021 season, Clayton qualified for the World Championships when she finished third at Jamaica’s national championships last weekend in a season’s best 54.20. She lowered that time to 53.90 while finishing second in the 400m hurdles to Femke Bol of the Netherlands, who set a new meet record of 52.27, a time that makes her the second fastest in the world behind US champion and newly minted world-record holder Sydney McLaughlin.

Brazil’s Alison Dos Santos stormed to victory in the men’s event in a new meet record 46.80, which was also the fastest time in the world this year. Dos Santos, the bronze medallist at the Tokyo Olympics, dismantled the field over the first 200m and led by almost 10m as they turned into the home stretch.

He eventually won by more than a second over the USA’s CJ Allen who clocked 48.28 for second place and Commonwealth Games champion Kyron McMaster, who was farther back in 48.58, a season’s best.

Danielle Williams also ran a season’s best but just missed out on a podium in the 100m hurdles won by the imperious Jasmine Camacho-Quinn. The Puerto Rican Olympic champion held off a stern challenge from Nigeria’s Tobi Amusan to win in 12.46, the Nigerian clocking 12.50 for second place.

Reigning world champion Nia Ali was third in 12.53 with Williams clocking 12.59 for fourth.

Mondo Du Plantis had another outstanding outing setting a new national record of 6.16m to seal yet another win in the pole vault.