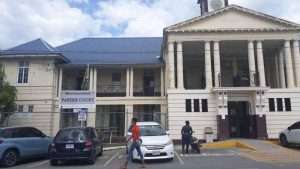 (JAMAICA OBSERVER) – The teenager accused of raping, buggering and strangling a nine-year old to death has denied killing her, instead telling the court on Wednesday that he watched as a man he knew squeezed the life out of the child.

“I did not kill [her]… [She] was like a little sister that I would go to her yard and play with and ride a bicycle,” the 17-year-old boy told the court.

He was 13 when the girl was killed. The two minors’ names and those of others in court are being withheld to protect the identities of both the slain child and the accused.

While on the stand on Wednesday, aspects of the boy’s story matched a detective constable’s earlier testimony about responses the teen gave during a question-and-answer session in the presence of his attorney. However the boy refuted some aspects of the allegations against him.

He denied thrusting his groin towards the rear of a male student who was among a group of students walking home on the day the girl died. He told the court that after the rest of the group refused his invitation to get apples, the girl made her way to the tree. She climbed under a barbed wire fence, he said, and he followed but lost sight of her.

He looked under a bridge to his left and then to his right, he said, when he saw two men standing beside the girl. He said he knew one of the men and he had a “long rusty machete”. The other was wearing a mask and had a gun.

He said the man with the machete stood watch behind him as the man with the mask pushed the victim to the ground, loosened his belt, took out his penis and put on a condom before raping the child for about four to five minutes. The accused said the girl screamed but the perpetrator told her to “shut up”.

He said the man he knew dropped his machete and proceeded in a similar fashion before squeezing the nine-year-old’s throat. He said the girl kicked for a while then stopped moving.

The accused said the man in the mask told him to go home and not tell anyone what had happened.

During her time on the stand on Wednesday, the mother of the accused boy — who was called by the defence — testified that while she did not join the search for the victim, she was shocked to hear that the child was missing and later found dead. She also refuted her son’s claim, in answering questions from a detective on the day of the incident, that he had taken a bath and washed his underpants. She said the boy did not bathe and was wearing the same underwear he wore to school when the detective visited their home and asked him for his undergarments.

In responding to questions from the Director of Public Prosecutions, Paula Llewellyn, the woman said she was not aware of her son being sexually active and having a girlfriend.

Earlier in the day, the prosecution continued building its case against the boy with testimony by chief forensic officer for the DNA unit of the Institute of Forensic Science and Legal Medicine, Dr Crystal Beetpot. Answering questions virtually, she provided DNA evidence which has linked the teenage boy to the buggering of the nine-year-old girl. She told the court that, based on a random match of a profile of one in a 175 quadrillion, the accused cannot be excluded from being the source of the DNA profile found in the girl’s anus.

Under cross-examination from Devon Brown, one of two lawyers representing the accused, Dr Beetpot disclosed that there is no DNA evidence linking the accused to the vaginal swabs of the victim.

The prosecution alleges that the child was raped, buggered and killed by the accused, whom he knew, after she accepted his invitation to pick apples as they walked home from school on June 5, 2018. Her body was found near a guava tree which is about 15 to 20 feet from the apple tree. A post-mortem report presented in court last week showed that the child died of asphyxia caused by manual strangulation. She also had lacerations of the vagina and anus.

DPP Llewellyn is expected to continue with her closing remarks on Thursday, followed by a summation from Justice Courtney Daye. The defence summed up its case on Wednesday.