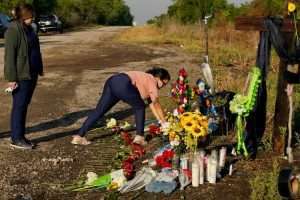 (AFP)— The number of migrants who died in San Antonio, Texas after they were abandoned in a red-hot trailer rose to 53 Wednesday, US immigration authorities said.

Eleven others remained under treatment in local hospitals, Immigration and Customs Enforcement said, without specifying their conditions.

That was up from Tuesday, when local officials put the number of dead at 51, including 39 men and 12 women.

The nationalities of the other three were not yet revealed.

San Antonio police were first alerted to the trailer by an emergency call at about 5:50 pm local time (2250 GMT) on Monday.

A worker near an isolated road in San Antonio heard a cry for help, went to investigate the trailer and found a number or corpses inside.

Juan Francisco D’Luna-Bilbao and Juan Claudio D’Luna-Mendez, both Mexican nationals whose US tourist visas had expired, were illegally in possession of multiple firearms, the documents alleged.

A third person, suspected of being the driver of the tractor-trailer, was arrested nearby while “very high on meth,” reported the local daily San Antonio Express-News, citing a law enforcement officer.