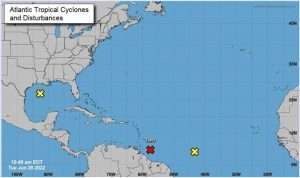 (AP) — The government of Trinidad & Tobago closed schools on Tuesday as forecasters warned that a tropical disturbance would bring heavy rains and gusty winds to the southeastern Caribbean.

A tropical storm warning was in effect for Trinidad & Tobago as well as Grenada and its dependencies, with forecasters warning that up to 6 inches (15 centimetres) of rain could fall there and in northeastern Venezuela. A tropical storm warning was issued for Venezuela’s Islas de Margarita, Coche and Cubagua as well as the Dutch Caribbean islands of Aruba, Bonaire and Curacao.

The US National Hurricane Center said the system expected to grow into Tropical Storm Bonnie would pass over or near the southern Windward Islands on Tuesday night.

Another disturbance further out in the Atlantic had a lower chance of becoming a named storm later in the week.

Far out in the eastern Pacific, meanwhile, forecasters said former Tropical Storm Celia was expected to fall below tropical cyclone force later in the day. The storm had formed off the coast of Central America on June 17.