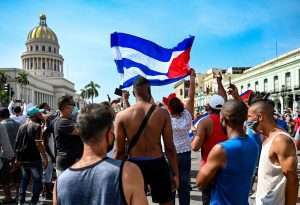 Judicial authorities in Havana, Santiago and Matanzas announced sentences for 74 defendants accused of sedition, public disorder, and other crimes related to the protests. Two defendants were acquitted.

Of those who were sentenced, 56 got between 10 and 18 years behind bars, while the other 18 — including 12 teenagers — had their sentences commuted to “correctional labour.”

Those convicted “attacked the constitutional order and stability of our socialist state,” the prosecutor’s office said.

Mass protests broke out across Cuba on July 11 and 12 last year, with demonstrators demanding freedom amid economic strife, shortages of food and medicine, and growing anger at the government. They were the biggest protests in Cuba since the 1959 revolution.

A crackdown by the security forces left one dead, dozens injured and 1,300 people detained, according to the Justicia 11J civil society organisation.

In previous court proceedings some protesters were jailed for up to 25 years.

The 74 latest sentences bring the total number of people sentenced as part of the demonstrations to 488.

In January, the government said 790 people, including 55 minors, had been prosecuted for the July demonstrations.

The Cuban government accuses the United States of being behind the protests.

The Cuban National Assembly in May approved a new criminal code, including stricter punishments for offenses such as “participation in subversive activities,” in an effort to prevent a repeat of the July protests.