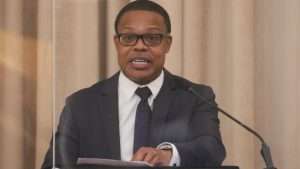 (CMC) – Trinidad and Tobago’s Foreign Minister, Dr Amery Browne, who is part of his country’s delegation to the Commonwealth Heads of Government Meeting (CHOGM) in Rwanda, had to put his medical hat on after a baby got sick on the flight from Piarco International Airport to Amsterdam, Netherlands.

Browne, a medical practitioner, wrote on his Facebook page “today I called upon some of my old skills to render assistance to a sick baby on a KLM flight from Port of Spain to Amsterdam”.

He wrote that the captain made an announcement and asked if there were any doctors on board.

“I volunteered and it turns out that I was the only one. The airline had a well-stocked medical kit, and we were able to manage the situation successfully,” Browne said.

The baby’s illness was not disclosed.

He said he implemented a programme of half hourly checks on the baby during the transatlantic flight, with reporting via the cockpit radio to a KLM specialist in Schipol Airport.

“Baby is now safe in Amsterdam and his mom is smiling and very pleased that a T&T delegation was on board her flight. Onward to CHOGM in Rwanda,” he added.