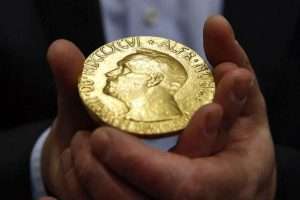 (AP) — The Nobel Peace Prize that Russian journalist Dmitry Muratov was auctioning off to raise money for Ukrainian child refugees sold Monday night for $103.5 million, shattering the old record for a Nobel.

A spokesperson for Heritage Auctions, which handled the sale, could not confirm the identity of the buyer but said the winning bid was made by proxy. The $103.5 million sale translates to $100 million Swiss francs, hinting that the buyer is from overseas.

The live auction happened on World Refugee Day. Previously, the most ever paid for a Nobel Prize medal was $4.76 million in 2014, when James Watson, whose co-discovery of the structure of DNA earned him a Nobel Prize in 1962, sold his.

Muratov, who was awarded the gold medal in October 2021, helped found the independent Russian newspaper Novaya Gazeta and was the publication’s editor-in-chief when it shut down in March amid the Kremlin’s clampdown on journalists and public dissent in the wake of Russia’s invasion of Ukraine.

It was Muratov’s idea to auction off his prize, having already announced he was donating the accompanying $500,000 cash award to charity. The idea of the donation, he said, “is to give the children refugees a chance for a future.” Muratov has said the proceeds will go directly to UNICEF in its efforts to help children displaced by the war in Ukraine.

Early Monday, the high bid had been only $550,000. The purchase price had been expected to spiral upward, but perhaps not over $100 million.

“It’s a very bespoke deal,” said Joshua Benesh, the chief strategy officer for Heritage Auctions. “Not everyone in the world has a Nobel Prize to auction and not every day of the week that there’s a Nobel Prize crossing the auction block.”

Since its inception in 1901, there have been nearly 1,000 recipients of the Nobel Prizes honoring achievements in physics, chemistry, physiology or medicine, literature and the advancement of peace.