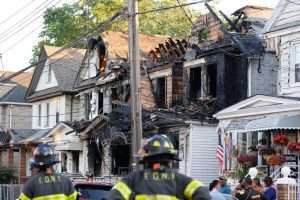 (GUYANA NEWS ROOM) – A massive ‘five-alarm’ fire in Ozone Park in Queen’s, New York has claimed the lives of three people while about nine families have been displaced.

According to the New York Post, the three victims have been identified as 59-year-old Nanda Persaud, his wife Bono Persaud and their son Devon. The News Room understands that the trio are New York- based Guyanese.

The fire, which began about 14:00 hrs on Friday, ravaged the three-story house that neighbours said had four apartments, located in the attic, second floor, first floor and basement. The Persaud family lived in the basement.

Two bodies were initially found after firefighters got the blaze under control at 16:45 hrs. The New York Post further reported that the third body- Devon- was found on Saturday, as people searched the building’s remains.

The eldest man retired from a medical company that made pills, his sister, Mohani Persaud told the Post.

“He was my brother. What can I really say? He was a good person. I am really sad,” she said.

The man’s wife worked at Kennedy Airport and their son was in his early 20s. The couple also had another son who was at the fire scene Saturday.

Meanwhile, two other houses were destroyed and five more were damaged by the inferno. It was reported that windy conditions spread the flames to the five other buildings, including three across the street.

The cause of the fire is not yet known as investigations continue.