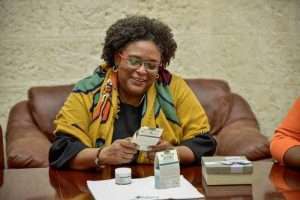 (CMC) – Prime Minister of Barbados Mia Mottley has tested positive for the coronavirus (COVID-19), according to an officially released statement.

The statement by the Office of the Prime Minister said that Mottley has “a mild case and she has indicated that she is doing well…The doctors have advised that she will remain at home until they determine otherwise,” the statement said.

Mottley has become the latest Caribbean Community (Caricom) leader to have tested positive for the virus that has infected and killed thousands of people in the region.

Gonsalves has said he would not be travelling to Rwanda for the Commonwealth Heads of Government conference which gets underway in that African country on Monday.

The meeting is expected to elect a new Commonwealth Secretary General, with Jamaica’s Foreign Affairs and Foreign Trade Minister Kamina Johnson-Smith challenging the incumbent Dame Patricia Scotland, who has been re-nominated for the position by Dominica.