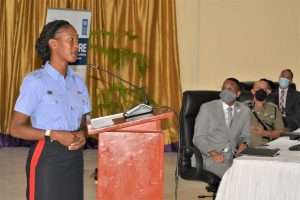 (BB UNDP) – Women are often the victims of crime. A report by the United Nations Office on Drugs and Crime and the Latin America and the Caribbean Region of the World Bank[1]  highlighted that violence against women affects a significant percentage of women and girls in the Caribbean, with the Caribbean ranking in the top ten recorded rape rates in the world. However, through the support of the United States Agency for International Development (USAID), the UNDP-led Strengthening Evidence-Based Decision Making for Citizen Security in the Caribbean CariSECURE Project, is ensuring that women are part of the solution.

As a component of USAID’s Youth Empowerment Services (YES) project, CariSECURE has been designed to improve youth crime and violence policy-making and programming in the Southern and Eastern Caribbean through the use of quality, comparable and reliable national citizen security information. Women were involved at the project’s inception, its subsequent roll out and now, as the project finalizes the major component, the Police Records Management Information System (PRMIS) women are also a critical part of ensuring that the benefits will outlast the project.

When Antonia Coutaine, WPC of the Royal Grenada Police Force was invited to be a part of a team of persons who would lead the way forward as the Royal Grenada Police Force transitioned to digital policing under the CariSECURE Project, she was more than happy to oblige. Now, one of 14 local PRMIS trainers in Grenada, Antonia is leading the way for continuous roll out and training within Grenada and the Caribbean.

As a PRMIS trainer, she is already seeing the benefits of the system. Noting that within a week of collecting and sharing data within the piloted platform, the police were able to apprehend a perpetrator who had previously evaded them for 30 days.  This digital policing is an asset to the police force, as it helps to diminish wait times and provide comparable data from which to better understand and in turn reduce crime.

Reminiscing on her earlier days in training, Antonia explained that the platform was engaging and easy to use. Adding that it mirrored their manual method of inputting data, and emphasized that it was much better. Praising PRMIS, Antonia stated, “It has created a more efficient system and given us the opportunity to track information that can be accessed by  persons simultaneously.” Highlighting further benefits of PRIMIS in practice, she explained how the platform allowed speed and efficiency in building a modus operandi (MO) for a series of house breakings. PRMIS allowed the various police stations and officers to combine and share data on locations, items being stolen, and suspects in a more efficient manner than if the info was inputted manually. This speed assists officers in gathering the information needed to make arrests faster.

Noting that PRMIS also had several benefits to the public she added, “with the click of a button, we are able to now give one particular complainant a history of what has been happening within the report that they made.”

Antonia, is one of 40 regional trainers and continues to pave the way for others in the region to learn about the PRMIS platform as Grenada and the rest of the Caribbean boost their citizen security through comprehensive, comparable, accessible data. She has conducted 7 regional training sessions, 4 station sessions and 3 RGPF-specific trainings. Antonia continues to educate her colleagues and regional partners on the uses and merits of this updated, paperless policing model.