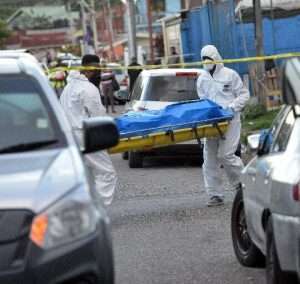 (TRINIDAD EXPRESS) – A MAN who confronted another man for threatening his mother last week was gunned down Tuesday afternoon.

Police said that around 2.30 p.m., 31-year-old Kearon Jones was at a house in Prizgar Road, San Juan, when a gunman ambushed him and shot him several times about the body. He died at the scene.

One of Jones’ relatives spoke with the Express but asked not to be named.

The relative said that a few days ago, Jones confronted a man after hearing he had threatened his mother. He thought that after speaking to the man, the issue would have ended there.

“It didn’t,” said the relative. “Yuh interfere with the man’s mom and he (Jones) talk to him. Yuh go kill him?”

He added that Jones was “not in anything illegal” and worked as a plumber.

He was the father of two, a ten-year-old boy and seven-year-old girl.

And a 21-year-old man was ambushed, shot and killed in Petit Valley on Monday.

Police said that around 5 p.m., Akeem Lopez, of Springview Drive, Petit Valley, was liming with a group of friends at a car wash off Morne Coco Road, opposite Valley Harps Pan Yard, when a silver Nissan B-14 Sentra stopped near the group, and two men leaned out the car and opened fire. The car then sped off.

Lopez sustained gunshot injuries to his abdomen, hands and legs.

His friends took him to the St James District Health Facility for treatment, but he was pronounced dead on arrival.

Police later recovered the car used in the shooting in Yogi Drive, Petit Valley. They said it bore false licence plates and had been stolen in San Fernando last February.

Police suspect the killing may have been gang-related.

The murder toll stood at 236 up to last night, while the figure on this date last year was 167.