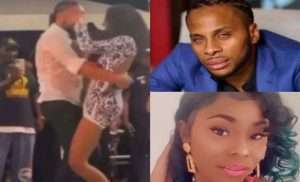 (JAMAICA OBSERVER) – Kakes Albury, the dancer that was accused of being a transsexual after a racy dancing session with dancehall star Dexta Daps during one of his recent stage shows, has come forward with a post on Facebook, dispelling the gender-bending rumours.

“I just want to say please stop spreading the false rumors of me being a trans/man, please stop ruining Dexta Daps name,” Kakes Albury, whose real name appears to be Kaylea Albury, said.

Dexta Daps posted a screenshot of her FB comment, and shared it with his 1.2 million Instagram followers on Tuesday.

“He is my favourite and only artist at heart (don’t get me wrong love it all) but I have my reasons for his music and other dancehall music. I am Dancehall Queen , I can do it all day,” Kakes Albury continued.

She thanked all those who supported and defended her against the torrent of abuse that suggested that she was a transsexual. A quick run through her photos which have been posted all the way back to her teenage years suggested that she is indeed a woman.

“Just wanna say respect and thank you to everyone who stood up for me (Kakes) and Dexta during this time, we appreciate the love and support, and those of you that spoke down, thank you too (I’m not thin-skinned Thank God) but what if I was a female with low self-esteem who just was having fun and y’all turned it left, right an center,” she asked.

The dancer, who lives in Nassau, Bahamas, revelled in all the attention that she has received for her savvy dance moves and sultry outer course she indulged in as she ‘showed out’ with Dexta Daps onstage. During her routine, she even slipped the Breaking News singer her phone number for good measure.

“Yes, it was me for clarification. For those that missed it. Me being a good dancer, I always say to myself and my best friend that if I ever got the chance, I would want to give him my number, I am a very ambitious women (sic) and competitive so when it come to showing up and showing out, I always do baby,” she said confidently.

In closing, she upbraided the ‘haters’.

“It’s amazing the extent some people go to for likes, once again, thank you, because of you haters, my dream came through. I meet the Daps and actually got to touch him. Don’t forget August 20th, Brooklyn, NY, see you there #DextaNKakes,” she said.

Dexta Daps, who is known for his smooth vocals, provocative lyrics, and sultry, signature performances, has developed into one of the industry’s bankable stars with hits such as Breaking News, Seven Eleven and Shabba Madda Pot.