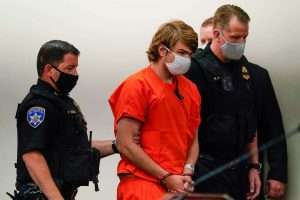 (AP) — The gunman who killed 10 black people in a racist attack at a Buffalo supermarket was charged Wednesday with federal hate crimes that could potentially carry a death penalty.

The criminal complaint filed Wednesday against Payton Gendron coincided with a visit to Buffalo by Attorney General Merrick Garland. He met with the families of the people who were killed and placed a bouquet of white flowers at a memorial outside the Tops Friendly Market, which has been closed since the May 14 attack.

“No one in this country should have to live in fear that they will go to work or shop at a grocery store and will be attacked by someone who hates them because of the color of their skin,” Garland said at a news conference.

Garland, who halted federal executions last year, did not rule out seeking the death penalty against Gendron, 18. He said “families and the survivors will be consulted” as the Justice Department weighs whether to seek capital punishment.

The federal hate crimes case is based partly on documents in which Gendron laid out his radical, racist worldview and extensive preparation for the attack, some of which he posted online and shared with a small group of people shortly before he started shooting.

FBI agents executing a search warrant at Gendron’s home found a note in which he apologised to his family and wrote he “had to commit this attack” because he cares “for the future of the White race,” according to an affidavit filed with the criminal complaint.

Three children of 86-year-old victim Ruth Whitfield said they told Garland at their private meeting that they wanted to make sure he didn’t view the Buffalo shooting “as a singular case.”

“This is a problem throughout America,” said one son, former Buffalo Fire Commissioner Garnell Whitfield Jr.

“It doesn’t stop with justice for our mother and the other nine victims. It’s how do we prevent these horrific crimes from happening, from breaking the hearts of other families,” said another son, Raymond Whitfield.

So far, the evidence made public against Gendron suggests he acted alone, but Garland and Deputy FBI Director Paul Abbate said investigators were examining the gunman’s communications with others prior to the shooting.

About 30 minutes before he opened fire, Gendron invited a small group of people to see his plans for the attack, which he then broadcast live on social media. It wasn’t clear if any of the people who accessed Gendron’s diary or saw his livestream did anything to alert authorities.

In his writings, Gendron embraced a baseless conspiracy theory about a plot to diminish white Americans’ power and “replace” them with people of color, through immigration and other means.

The posts detail months of reconnaissance, demographic research and shooting practice for an attack aimed at scaring everyone who isn’t white and Christian into leaving the country.