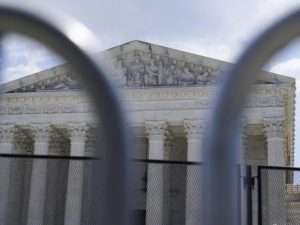 (AP) — The Supreme Court has ruled against immigrants who are seeking their release from long periods of detention while they fight deportation orders.

In two cases decided Monday, the court said that the immigrants, who fear persecution if sent back to their native countries, have no right under a federal law to a bond hearing at which they could argue for their freedom no matter how long they are held.

The justices also ruled 6-3 to limit the immigrants ability to band together in court, an outcome that Justice Sonia Sotomayor wrote “will leave many vulnerable noncitizens unable to protect their rights.”

In recent years, the high court has taken an increasingly limited view of immigrants’ access to the federal court system under immigration measures enacted in the 1990s and 2000s.

“For a while, it seemed like the court was going to push back a bit.

In extreme cases, it would interpret a statute to allow for as much judicial review as possible,” said Nicole Hallet, director of the immigrants rights clinic at the University of Chicago law school.

“Clearly now, the court is no longer willing to do that.”

The immigrants who sued for a bond hearing are facing being detained for many months, even years, before their cases are resolved.

The court ruled in the cases of people from Mexico and El Salvador who persuaded Homeland Security officials that their fears are credible, entitling them to further review.