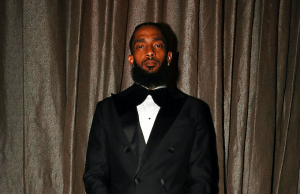 (NEW YORK POST) – Opening arguments in the Nipsey Hussle murder trial are set to begin Wednesday, more than three years after the rapper was murdered outside his Los Angeles clothing store.

A jury was selected Monday to hear the case against accused killer Eric Ronald Holder Jr. — and six alternate jurors were being chosen on Tuesday, according to KTTV.

Holder, 32, allegedly shot Hussle – whose real name was Ermias Joseph Asghedom – on March 31, 2019, after an argument.

Deputy District Attorney John McKinney told a grand jury in 2019 that the “Grinding All My Life” artist accused Holder of “snitching,” which McKinney added, “in the gang world, is a very serious offense.”

Both men were affiliated with the Rollin’ 60s gang in South Los Angeles, officials said.

He was arrested days later, pleaded not guilty to murder and attempted murder charges and has been jailed since.

Hussle, a Grammy-nominated rapper and father of two, was 33 years old at the time of his death.