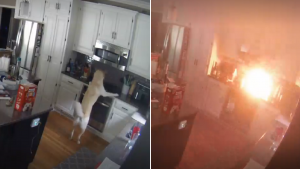 (NEW YORK POST) – A Missouri home burst into flames after a dog inside managed to turn on the kitchen’s stove, leading to a grease fire, officials say.

The incident – which was captured on the homeowner’s security camera – unfolded Friday morning in Parkville, just outside of Kansas City, according to Southern Platte Fire Protection District Division Chief Chris Denney.

“New appliances are being seen with touch controls that activate by the simple touch of a finger. An animal’s paw can also activate these types of controls,” Denney said in a statement to Fox News Digital.

“Please use built in safety’s if available on appliances when not in use and accessible by children and/or animals,” he added.

Denney said only two dogs were inside the home when the fire began.

Video released by the Southern Platte Fire Protection District first shows one of the dogs standing on its hind legs looking over the stove, with its paws on the cook top. The dog then drops back down to the floor.

Then the footage shows smoke filling the kitchen before the stove ultimately bursts into flames.

Denney told Fox News Digital that grease in “a pan from the night prior’s dinner” ignited.

Both dogs were saved, but images released by fire officials showed extensive damage to the inside of the home.