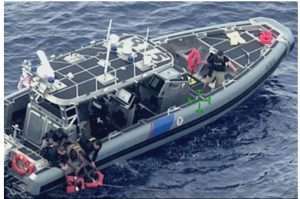 AP — They were told to dress totally in black and to leave cellphones and all identifying documents, including passports, behind.

The group of about two dozen Haitians, maybe more, departed on a small motor boat from the coast of the Dominican Republic headed to Puerto Rico, about 80 miles away across the treacherous Mona Passage.

That was in early March. And that’s the last anyone heard of them.

Their disappearance remains a mystery and a source of anguish for relatives, who refuse to accept that a boat full of people could just vanish. The agencies that routinely patrol the area — the US Coast Guard, US Customs and Border Protection and the Dominican Navy — say they have no record of a boat fitting that description capsizing in the passage.

“People are going missing and no one is paying attention,” said Mozeline Beauvais, 48, a nurse from Philadelphia whose 20-year-old foster daughter, Fedena Louis Jeune, is among the missing. “They’re young girls. They’re young boys, people in their 20s. They are moms with babies.”

The missing people are among the thousands of Haitians who have been desperately taking to the sea in the past few months, fleeing the desperation in their homeland in the largest exodus of Haitians since 2004. Though most leave from the northwestern Haitian coast bound for the Florida Keys, many others journey through the neighboring Dominican Republic, where they pay smugglers to get them on boats to Puerto Rico. Since October alone, the US Coast Guard has intercepted more than 5,300 Haitians at sea.

No one knows how many have tried to make the trip and never made it. The only certainty, US authorities say, is that the voyages are frequently deadly.

Beauvais says she last spoke to her daughter on February 27. Louis Jeune gave no indication of her plans to take a dangerous sea voyage to the United States. Beauvais says she found out about the trip after friends of her daughter’s called and said they had not heard from her. After asking questions, Beauvais said she learned that her daughter, whom she had cared for from infancy, and a friend had boarded a boat bound for Puerto Rico.

After digging around, Beauvais found out a little more; her daughter had taken one of the small, makeshift open boats known as yolas that smugglers use to take migrants from the Dominican Republic to Puerto Rico through the Mona Passage.

Beauvais has spent months contacting what is now a three-page-long list of agencies and immigration detention facilities around the US trying to find out if any of them has her daughter in custody.

“My head spins because I don’t know what I am supposed to do,” she said. “I just want to focus on finding her.”

Other relatives of the missing, desperate for information, have come together in a group on the WhatsApp social media platform, where they have shared photos and compiled a list of the passengers.

Through text messages and anonymous voice notes they’ve tried to drill down: from where and when exactly did the boat depart? How much did passengers pay? Who was on the trip? And most important: How could a boatload of Haitians disappear without a trace?

Through their pain, they have also provided portraits of some of the missing. There is the “pretty, young lady who is well-educated,” whose uncle in Canada said he thought she was being smuggled on a cruise ship when his sister told him about the voyage; a man who sold his car to find the money to pay for the trip; and Mirielle Lamy, a singer whose YouTube channel now features a purple banner with her face illuminated by golden light.

“I cannot sleep. Every time I close my eyes I see my sister,” said Naomie Lamy, who lives in Miami and is searching for Mireille, her younger sister, a singer known as “Miyou.”

Family members interviewed by the Miami Herald say they have checked with authorities in Puerto Rico and the Dominican Republic for information about the missing boaters. So far they have come up empty. One relative told the Herald that the migrants were told to wear all black and leave all documents behind, an account that was also separately mentioned by one of the people in the WhatsApp group.

The US Coast Guard in Puerto Rico, US Customs and Border Protection in Puerto Rico and US Immigration and Customs Enforcement told the Herald they had no records on a missing migrant boat fitting the description provided by reporters, or information about a capsizing in early March. The Dominican Navy also said it had no record of a boat or passengers matching the descriptions.