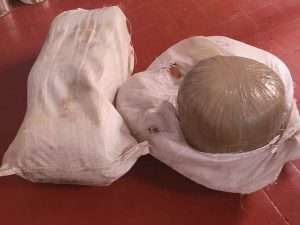 PR – On Wednesday 8th June, 2022, officers attached to the Drug Squad Unit intercepted a Green Toyota RAV4 along the Springs Public Road and conducted a search of the vehicle, which revealed two (2) nylon bags containing Cannabis.  The Cannabis weighed seventy-six pounds (76lbs) and carries an estimated street value of one hundred and seventy-two thousand, three hundred and sixty-eight dollars ($172, 368.00).

As a result of this, Calvin Patterson, 45 years, Fisherman of Kingstown, St. Vincent & the Grenadines, Jerry Thomas, 43 years, Painter and Raymond Lewis, 51 years, Driver both of Grand Roy, St. John, were arrested and charged with Trafficking in a Controlled Drug.

An additional charge of Entering the State without the Consent of an Immigration Officer was preferred against Vincentian National Calvin Patterson.

The vehicle was also impounded.

Lewis and Thomas were granted bail in the amount of thirty thousand ($30,000.00) with one (1) surety. As part of their bail condition, they are to report to the Grand Roy Police Station every Wednesday. While Patterson was remanded to Her Majesty’s Prisons.