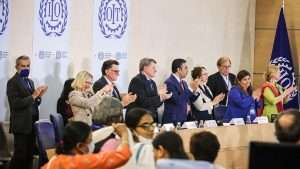 Delegates adopted the measure at the Conference’s plenary sitting on Friday 10 June.

Until now there have been four categories of Fundamental Principles and Rights at Work:

The Conference also approved eight amendments to the Maritime Labour Convention, 2006 (MLC, 2006), which focuses on the rights and working conditions of seafarers. These amendments had been negotiated and adopted in May 2022 by seafarers’, shipowners’ and governments’ representatives during the fourth meeting (Part II) of the Special Tripartite Committee of the MLC, 2006.

The new provisions, expected to enter into force in December 2024, will contribute to enhancing the living and working conditions of seafarers around the world, based on some of the lessons learned during the pandemic.

Earlier in the day, the ILC held the high-level, World of Work Summit: Tackling multiple global crises, promoting a human-centred recovery and resilience. Discussions focused on the urgent action needed to address the labour and social consequences of the current crises, and the use of human-centred approaches to support peace, resilience, and inclusive development, in particular for the most vulnerable populations.

“While the picture is bleak and the outlook uncertain, we must not lose sight of our vision for a better future of work. The hopes and dreams of millions depend on us. We cannot let them down. Together, we must deliver on our promise of a better, fairer, more inclusive, future for all,” said ILO Director-General, Guy Ryder at the opening of the Summit. “We must renew our efforts to create decent work opportunities, especially for the most vulnerable groups,” he added.

In a separate segment, the summit also featured addresses by the Presidents of the Republic of Seychelles, Wavel Ramkalawan, and Honduras, Iris Xiomara Castro Sarmientos. Both addressed the most pressing issues shaking up the world of work.

Speaking of the exclusion generated by the capitalist system, Castro Sarmientos emphasized the problems faced by small producers, adding “In this system of exclusion, women, girls and boys are the most affected.”

“Our message should be one of hope. Our actions and policies should present hope for our people, while we fight the scourges of corruption, exploitation and injustice,” said Ramkalawan.