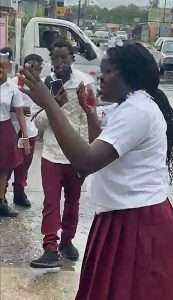 That was the disciplinary action imposed by the Ministry of Education on the Williamsville Seconda­ry School pupil who stabbed her schoolmate outside of the school’s premises on Monday.

The Education Ministry (MoE) announced the firm action on the incident via a media release yesterday.

The pupil was handed the maximum penalty as outlined in a communiqué to principals from the ministry on Tuesday.

A 15-year-old schoolgirl who was detained by police regarding the incident remains at the juvenile booking centre at the Oropouche Police Station, with no charge yet laid against her.

The victim, who was slashed and stabbed on her face, chest and hand with a knife by her schoolmate, is still hospitalised at the San Fernando General Hospital.

She sustained a ten-centimetre cut to the right side of the face, from her eye to her lip, a three-centimetre-deep laceration to her chest wall, and a slash to the left arm.

The victim, who is also 15, is a Form Two pupil and a prefect of the school.

Her lungs are being monitored by medical personnel to ensure she does not develop any complications that could lead to breathing issues, her grandmother told the media at her home in Monkey Town, New Grant, on Tuesday.

The victim’s family found out about the stabbing from a video posted on social media, the grandmother had said.

The grandmother added that her grandchild was previously threatened, but uncertain whether any disciplinary action was taken against the perpetrator.

The statement from the ministry yesterday said it had decided to expel the Williamsville Secondary School pupil who stabbed her schoolmate, adding that the “decision was taken based on the heinous nature of the action, perpetra­ted even as the student was actively receiving the support of the Student Support Services Division (SSSD) at school. The MoE has referred the family to the Ministry of Social Development and Family Services (MSDFS) for intervention”.

The ministry said maintaining a safe and secure learning environment is a responsibility of the Ministry of Education, and the provisions of the Education Act and existing National Code of Conduct will be utilised in furtherance of this.

However, it added that suspension and expulsion of students are not desired outcomes as “even with the measures instituted at schools to encourage positive behaviour in students, the importance of parents discharging their duty to regulate their children’s behaviour cannot be overstated”.

The ministry added that its SSSD is staffed with over 700 personnel such as guidance counsellors, school social workers, special education instructors, psychologists and diagnostic specialists.

These officers operate throughout approximately 625 public pri­mary, secondary and special schools, and while existing vacancies are being filled, it must be no­ted that the work of these officers is most effective with the co-operation of parents and interventions at the level of the family, said the ministry.

“As such, families of all students who are displaying negative beha­viour will be referred to MSDFS for intervention outside of the school environment, as the students’ behaviour is often linked to family issues, and the problems they present with cannot be solved simply at the level of the school.

“Though it is factual that intervention of Community Police in 14 schools has reduced the level of serious fights within their compounds, the Ministry is closely monitoring the schools without a history of violence that are now having disturbances, and the growing trend of students leaving the school compound, where patrols and vigilance have been heightened, to fight in the streets. The MoE has formally requested that the TTPS increase patrols in all districts at the close of the school day,” said the ministry.

The ministry said it will continue to collaborate and partner with all stakeholders, ministries and their agencies as it does what is required to maintain the safety and security of our nation’s schools