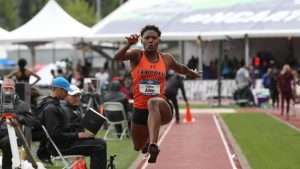 (AP) – Information from the first case to be prosecuted under a new law designed to criminalise widespread doping conspiracies has been used to level a four-year ban on a triple jumper from Georgia.

The US Anti-Doping Agency announced the sanction Thursday for 27-year-old Sabina Allen, who is from Norcross, Georgia, and competes for Jamaica.

Allen tested positive for two prohibited substances after finishing first at a low-level event in Chula Vista, California, last May. Her ban is retroactive to June 24, 2021.

Evidence for the case came from a criminal case against Eric Lira, a naturopathic doctor from El Paso, Texas. In January, federal prosecutors charged Lira with providing performance-enhancing drugs to athletes. Among them was star Nigerian sprinter Blessing Okagbare.

Lira was charged under the Rodchenkov Anti-Doping Act, which was passed to go after people and organizations that fund and promote international doping schemes.

While the law wasn’t designed to go after individual athletes, it has opened up opportunities for information sharing between law enforcement and anti-doping regulators.

USADA said arbitrators in the case determined that Allen’s claims that she used performance enhancers unintentionally — or that the positives came because drugs were manipulated — were false. Those determinations were reached with the help of messages that undermined Allen’s defense and were provided by federal prosecutors in the Lira case.

“Information shared by law enforcement from the first RADA case involving Eric Lira allowed USADA to expose the truth in this case,” USADA CEO Travis Tygart said. “We thank the FBI, US Attorney’s Office for the Southern District of New York, and other federal agencies for their continued work to protect the integrity of sport under RADA.”