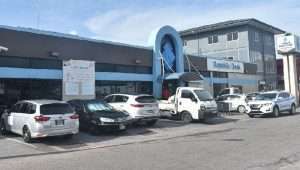 (TRINIDAD EXPRESS) – Police said it was a break-in, not a robbery, at Republic Bank Ltd (RBL) in Couva two weekends ago.

ASP Sheridon Hill, public information officer in the Corporate Communications Unit of the Trinidad and Tobago Police Service (TTPS), said he was unable to provide specific details on items stolen from the bank.

“Specific details of the items taken during the break-in will be given at a later time,” Hill told the Express in a phone interview on Monday.

Over the long holiday weekend between May 27-30, criminals broke a concrete wall at the branch of RBL at Southern Main Road, Couva, located opposite to the Couva Police Station, and through a hole less than half a metre in diameter at its widest point, gained access to the bank.

If anything was stolen from the bank’s branch, it was not disclosed by police or RBL.

However, a statement from RBL said the branch’s cash vault was not breached and all customers’ records and files remain secured.

Employees of the bank turned up for work on May 31 and discovered the hole in the concrete wall.

Police were contacted by bank officials shortly after 7 a.m. and a team of officers from the Couva station walked about 100 metres to the crime scene at the bank.

A police report on the incident stated the bank manager told police the bank was locked and secured by a security officer around 6.30 p.m. on Friday May 27 and closed for the weekend.

The manager said that around 7 a.m. on Tuesday May 31, she arrived at the bank and received certain information from a security officer.

She then proceeded to the northern side of the building where she observed a hole in the wall of the communication room.

The bank manager then made further checks and observed the ceiling tiles above a vault in the north-western corner of the building removed and debris around the vault.

She then had the bank secured and made a report to Couva police.

The bank manager indicated the vault contains safety deposit boxes and other records belonging to the bank.

Acting Sgt Harriot and PC Flemming visited the scene and observed the hole in the wall of the communication room and also a hole on top of the vault, piercing through approximately eight inches of concrete and a one-inch thick sheet of metal.

Several metal boxes (identified as safety deposit boxes) were also observed on top and on the floor near the vault, and they were all open and empty.

The report further stated both officers interviewed persons and received information that as per CCTV footage on the exterior of the bank two persons were seen on the northern end of the building around 1 a.m. on Sunday.

They also covered the camera with something obstructing its view, the report said.

Officers of the Central CSI visited the scene and processed the area for finger prints.