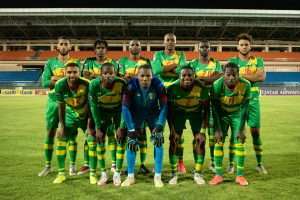 PR – The Spiceboyz dominated much of their Concacaf Nations League  home fixture against El Salvador but lost out on the chance for an outright win in the last few  minutes of the match.

In a much improved display over their first match in El Salvador, Grenada was first on the  scoreboard on Tuesday night at the Kirani James Athletics Stadium with Jacob Berkeley Agyepong  converting a deflected ball in the El Salvador half in the 29th minute.

As with the first match, both sides scored goals in quick succession of each other, as El Salvador’s  Alexander Larin converted a spot kick six (6) minutes after Grenada; the opportunity coming off  a foul of Nelson Bonilla.

Grenada did not give El Salvador many opportunities to equalize until the 88th minute when Cristian Gil found the net after an initial save by Grenada’s goal keeper Jason Belfon.

Following the match Jamal Charles said, “The team played very well but we were dissapointed  that we did not get the win. We will go back to work on our weaknesses as we look forward to  facing the USA.”

Senior Men’s Head Coach Michael Findlay said, “ We dominated most of the match and should  have won, but the loss of concentration cost us victory. However, the team’s excellenct  performance shows that the Senior Men’s programme is bearing fruit.”

The Spiceboyz left the island Wednesday for their League A Group D away fixture against the USA  on Friday June 10,2022 at the Q2 Stadium, Texas.