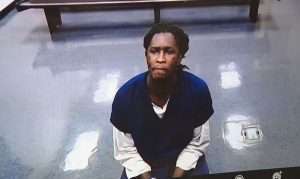 (URBAN ISLANDZ) – Young Thug was denied bond late on Thursday afternoon as the court heard lengthy submissions from the prosecution as to why the rapper should not be let out of Cobb County jail.

Young Thug, whose real name is Jeffery Lamar Williams, is among 28 people named in a Racketeer Influenced and Corrupt Organizations Act, RICO indictment that outlines more than a hundred offenses he and his Young Slime Life associates committed from 2012 to the present.

During the hearing, the prosecution argued against bond being granted as lead prosecutor Don Geary pointed out that the rapper was not only influential in the YSL criminal enterprise, but he was a leader that could influence others to act on his behalf and witnesses in the case would be in grave danger.

Thugger was arrested on May 9, 2022, and is being held at Cobb County jail. This is his first bond hearing, having had the hearing delayed due to legal issues that arose regarding his attorney Brian Steele.

The prosecutor raised several points about Young Thug, including concerns about his children. However, Geary noted that in Thug’s separate case for guns and drugs, the rapper didn’t appear that concerned.

The swaying point raised by the prosecutor and which the judge zoomed in on was the fact that more witnesses have come forward to express fear for their lives, including other gang members whom the prosecutor said expressed fear that Young Thug as leader of the gang, wielded much power and influence.

“Since the last time I was in front of the court, we have evidence and information of even more threats to our witnesses, but I want to be clear I have no evidence directly that Mr. Williams made a threat or directed anybody to make a threat but our witnesses are being threatened with violence, serious violence and death.”

He added, “This criminal street gang pre-existed the label record…I believe he does has clothing.. I believe that many of the crime families get into legitimate businesses and I believe that Mr. Williams has done no different.”

The prosecutor also said that other members of the YSL gang, some of whom are on the same indictment and others who are not, have identified Young Thug as extremely dangerous.

“We have taken proffers from fellow gang members of Mr. Williams, Some are on this indictment, some are not, they are stated uniformly Mr. Williams is dangerous, they are afraid of him, that if they cross him he would kill them and their family,”

The prosecutor went on to speak about evidence in songs like “eww” that spoke about everyone giving Thug money, and also a group chat from 2015 where Young Thug allegedly spoke about dire consequences that might befall anyone who goes against the gang.

In that chat, Young Thug reportedly made a threat to YSL members following the death of Donovan Thomas Jr., with whom he is accused of having a dispute and later ordered his murder. The car used in the murder was leased in his name while rappers Lil Duke and Yak Gotti were charged for the murder.

“If anybody goes in the courtroom and tells the God’s honest truth, they need to get f****g killed,” the prosecution said of one message sent by Thug just 16 days after the murder of Thomas.

Geary added that that threat is still being discussed by YSL members who fear Thug and his power and money.

The prosecutor also checked Thug’s attorney Brian Steele saying that the rapper has never done drugs, pointing out a phone call from Cobb County jail that requested medical help for Young Thug as he needed to detox.

Thug’s attorney argued unsuccessfully about his client’s presumed innocence and also addressed several lyrics by the rapper which were offered out of context.

Despite defense counsel offering conditions like paying a high bond and restricting the rapper’s ability to move or travel through house arrest, wearing an ankle monitor, or having his residence guarded by post-certified law enforcement officers, the judge sided with the prosecution that bond should be denied.

The judge weighed his decision on two main points raised, which were that the rapper posed a danger to the community should he be released as well as a flight risk due to his access to resources and money.

Having weighed the other factors, such as his presumption of innocence, the judge noted that there are significant proffers about Thug being a danger to the community, and the state’s evidence that they have taken proffers by others, including gang members, all raised significant concerns that cannot be ignored.

“This threat is still being talked about so that is of a concern for this court in regards to the dangers and threats to persons in the community…that is the court’s major concern,” the judge noted.