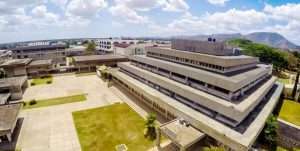 (CMC) – The Trinidad and Tobago government has rejected a proposal from the St Augustine campus of The University of the West Indies for an increase in tuition fees.

Instead, the government has suggested that the institution finds other ways to address its financial shortfalls including a review of the courses offered.

“We have been faced with a challenge with the St Augustine campus continuing to ask us for large sums of money. We spend somewhere in the vicinity of TT$500 million a year as a direct contribution. And then you have to add Government Assistance for Tuition Expenses Programme (GATE) funding to that. I would say, at least TT$200 million in addition,” said Finance Minister, Colm Imbert, who is also chairman of the UWI Grants Committee.

The proposal for the increase came in response to the Trinidad and Tobago government’s intention to implement a 10 per cent reduction in its subvention to The UWI for the 2022-23 academic year, resulting in a cut of more than TT$50 million from the current subvention.

On May 13, Imbert, Education Minister Dr Nyan Gadsby-Dolly, Minister of Housing and Urban Development, Camille Robinson-Regis, and attorney and government backbencher, Keith Scotland, as a prime ministerial-appointed committee, met with the St Augustine Guild on the issue of raising fees given the government’s reduced subvention.

Gadsby-Dolly said the increased fees would have seen students paying between 25 to 71 per cent more depending on the course of study.

Imbert, who was flanked by Gadsby-Dolly at the weekly Cabinet press conference on Thursday, said, while the government could not direct the campus on how to run its affairs, it was suggested that some of its 300 courses be re-examined.

“So you have a vast array of courses and you have 16,000, 17,000 students…the university needs to look at all the courses that they want the Government and the country to pay for.

“We are not going to tell them what courses to put on, but we believe that they need to look at all these courses they are offering and decide which ones the Government should pay for.

“That is our response to their proposal that they increase tuition fees. Because we think that that increase in tuition fees should be a last resort [and that] The UWI has to look within first and see whether they have not overextended themselves. Because the cost to the state is directly proportional to the number of students and the number of courses that are being offered,” Imbert said.

Gadsby-Dolly acknowledged that fees at the St Augustine campus had not increased in 21 years in contrast to the Mona and Cave Hill campuses of the university, which had increased their fees in line with inflation.

But she told reporters that the government currently contributes 82 per cent of the campuses’ annual budget.

“The committee recommended that the St Augustine campus do an in-depth cost analysis and, of course, efficacy analysis looking at all the courses they offer; looking at enrolment and consider how we could possibly reduce where it possible. That information has been requested of the UWI, [and] some have been supplied. So we will be preparing all of that and looking at it as we follow up during this academic year.”

Gadsby-Dolly added that the government did not support an increase in university fees at this time and would come to a conclusion for next year after receiving the information from the campus officials.

No timeframe was given for the campus to submit the information, the education minister said.

Asked by reporters how he found the financial operations of the St Augustine campus given his position as chairman of the grants committee, Imbert replied it was a contentious topic.

“We are not talking about UWI St Augustine; we are talking about The UWI. That is the subject of a lot of confusion within the university right now. Because there was a report indicating, more or less, these are my words, that UWI may have sort of over-extended itself into growth.

“It has grown to become a huge organisation. But, in doing that, growing at such a rapid pace, it outgrew its ability to finance itself. So I can see that, in that committee, I can see the problems that resulted from that.